Vodka is probably one of the most popular spirits in the world and is consumed by so many people. They have no taste but this is what makes the liquid can be made into various other drinks with fancier flavors. For those who just want to have a good vodka, Absolut Vodka Vs Smirnoff are two very affordable options to try. They certainly are not the best but works well for most of us yet, do check or short comparison below first to see which will be the better option. 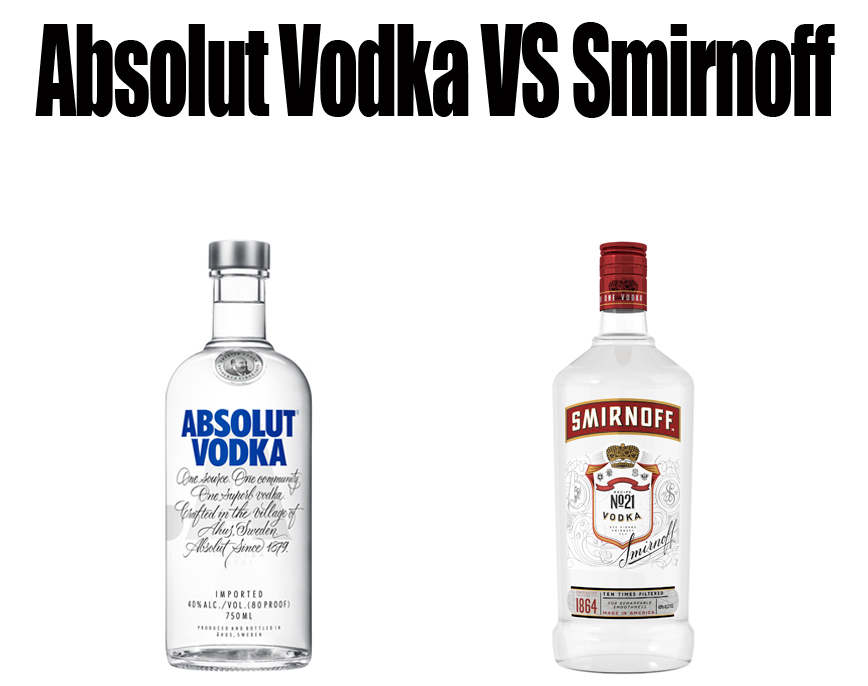 Alcoholic beverages are a part of human culture itself and have been with us for very long in almost all regions where civilization started. No one really knows when it was started being consumed or who was the first person making them but everybody knows that alcohol is a staple in many households, bars, restaurants, etc. They help you relax, enjoyable as many can be made tasty, or help you warm in cold weather. Alcohol is a very popular beverage and entertainment.

Alcohol can be made from various ingredients, some are fermented and some are distilled depending on the type. Among those many types of alcoholic beverages including some Asian alcohols like Sake Vs Shochu, Vodka is probably more universal. You can find them almost anywhere from the cheap, strangely popular type to those that can cost quite a lot. It is probably subjective but we also think that while the beverage is known for being colorless and tasteless, they do taste different or feel different to each other.

One of the reasons why Vodka is very popular probably because of this characteristic as well. Most alcoholic beverages have a certain taste that was brought from the original ingredient or spices put in the making process which makes them tricky to mix with other beverages or ingredients but Vodka is different. The liquid is clear, like water which is called Voda in several Slavic languages and has no taste with typical alcohol or ethanol content of 40% with the rest of it filled with water.

Since the mixture is the same, the result should be the same as well and taste identical to each other but, this is not the case. While cheap Vodka is everywhere, you will know some people who are willing to spend $60 just for a bottle of this tasteless beverage and wonder what the reason is. The reason is because not all of them actually taste the same. They still have no taste but each brand has their own composition and scientists seem to have found the answer.

Nobel Prize-winning chemist Linus Pauling speculated that the hydrate clusters of molecules from Vodka might consist of an ethanol molecule sequestered by a hydrogen-bonded framework of water molecules. Using high tech instruments samples of Vodka form different brands are analyzed and found that they have different concentrations of ethanol hydrates and this might be the reason that affects our preference as we can have certain likeness of particular structure. Thus, rather than taste in a traditional sense, we may perceive this internal structure of the beverage. 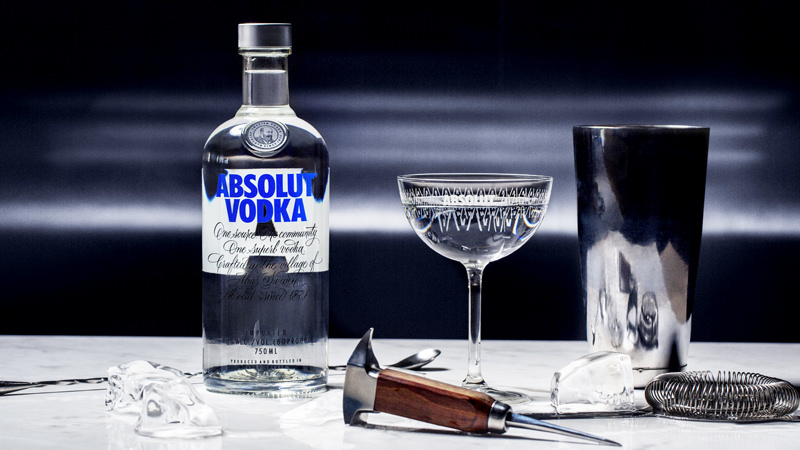 About Absolut Vodka and Smirnoff

Thinking like this, it is no wonder that people want to spend more on the brand they like better and at the end, it is all about preference, about which tastes better to you and probably what is best for the pocket as well. Along with the trend and being one of the most popular alcoholic beverages they are, it is not surprising to see lots of names in the Vodka market. They compete with each other, claiming the premium name but it is all based on your personal taste.

Numerous brands out there but if you are here then Absolute Vodka and Smirnoff are two candidates for the shop. They are familiar names, very familiar that you can find one in almost any countries that legalize alcohol. They are easy to mix and most people seem to agree with the texture as well including bartenders. Not many can be boasted from these well-known names except for being affordable but not all people will have the same opinion.

Absolut Vodka is a common brand and one of the leading names in the market. Absolut started in Sweden and started to become very popular in New York around the 1980s. The manufacturer used advertising to familiarize their beverage which was successful and includes various aspects from art, fashion, cities, spectaculars, Hollywood, etc. Campaign still happens today even when almost all people have recognized them. For example the recent art competition in 2018 which was juried by famous visual artists like Mickalene Thomas and Bose Krishnamachari.

For Smirnoff, the history started from Moscow or a vodka distillery founded by Pyotr Arsenievich Smirnov. He was so successful and even said to be Tsar’s favorite and after his pass, the son Vladimir Smirnov continued the business which then turned prosperous as well. Today, the brand is distributing the beverage in 130 countries as well as being produced in several countries including Brazil, Honduras, and India. 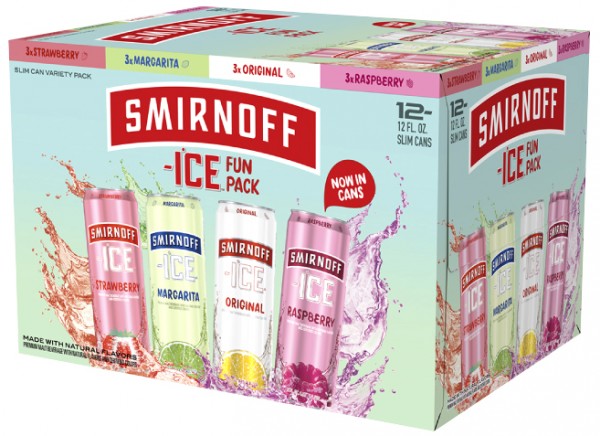 While Vodka itself is known to have no flavor, modernization brings lots of new trends into the classic liquid as now they are fancy with fruity and unique flavors to try. Absolut Vodka and Smirnoff are two among other brands that incorporate flavoring into their regular beverage and this is also attracting more customers because let’s be honest, not all of us are fond of just water and ethanol mix. This made them more similar to soft drinks but with the kick of alcohol.

Flavor is subjective but we personally like the fruit variants of these vodkas as they go well with just being chilled and save you the time to add any other ingredients to give it a taste. Our personal favorite for just any time is Smirnoff Ice which is more like a soft drink with very low alcohol content, perfect for almost any occasion. If you are currently feeling fancy, Absolut has a luxury variant called Elyx that is distilled using copper columns still and made from winter wheat from a single state in Southern Sweden.

Just like for almost anything, Vodka also comes from certain ingredients and starting from Absolut. This brand is pretty unique for its effort to only use the ingredient from a certain area and all of their beverage is made from winter wheat that grows in the large Skane region of Sweden which cost more than a hundred thousands of tons for the manufacturing process per year. Winter wheat is planted in September and harvested in August. This certain wheat is said to be high in sugar that makes it perfect for fermentation.

On the other hand, Smirnoff is made from corn which is giving the beverage an upper hand because it means people who are concerned about gluten can enjoy this Vodka as well, knowing that many other brands are made from wheat.

The next part we want to talk about is how they are made but in modern days, most manufacturers are using multi-column stills to produce the beverage. It may vary but columns still are working in the same manner. For Smirnoff, they are distilled three times and filtered 10 times as well as the first brand that uses charcoal filtration. The exact process may differ among brands but multi-column work like this;

Now comes to the very subjective part which is taste but since initially they are flavorless, there is not much to talk about the flavors except that we personally like fruity and flavored vodka with a slight sourness to it. In terms of experience, many Vodka smells like bread especially those made from wheat like Absolut. Both Absolut Vodka and Smirnoff however, are very smooth but still have a kick that is familiar for affordable options. They go well with just ice or mixed with soda and serve with other ingredients for mixed drinks.

When it comes to buying a Vodka that you never taste before, we do think any of these two will be a great option. They are made from different ingredients so the overall experience can be different with comparison Smirnoff as the smoother one and probably better for an ingredient in your mixed drink without telling its presence so much. The fact that it is made from corn also makes it suitable for drinkers who avoid gluten.

It is best to shop based on which seems to fit your preference better. It is impossible to tell without tasting them yourself but personally we like any of them, they are pretty smooth, goes well with or without any additional ingredients as well as affordable.