In the following article, we will compare two popular vodka brands, Belvedere vs Ciroc. One of them comes from Poland, whereas the other is from France. These two vodkas are made from different ingredients, too. So, which one is actually the better vodka? Continue reading below to find out! 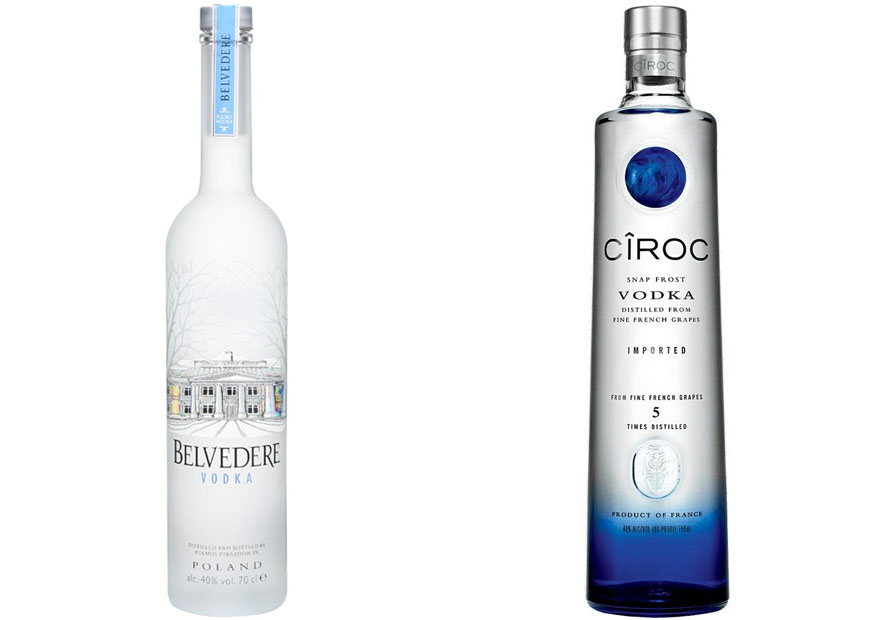 Company Overview Belvedere
Belvedere comes from Poland. This vodka is now produced and marketed by LVMH. It is a Polish rye vodka which is named after Belweder, the Polish presidential palace which is located in Warsaw. You can see the picture of the said building on the vodka’s bottle. However, the vodka’s production actually takes place in Zyrardow. See also: Belvedere vs Ketel One.

It is widely considered as a luxury liquor. In fact, Belvedere has been marketed as “the world’s first super premium vodka” by the company. That said, this term is rather vague, and is more of a marketing label instead of an official classification.

The distillery for Belvedere’s production was built in 1910 and started its production in 1993. Belvedere was released into the United States in 1996. However, the brand was purchased by LVMH in 2005. Then, the company formed a partnership with Product Red in 2011; half of the profit from this partnership is donated to Global Fund for fighting tuberculosis, malaria, and HIV/AIDS.

Belvedere has partnered with many celebrities, including Usher, Janelle Monae, Chelsea Handler, and John Legend. In 2015, Belvedere was chosen as the official vodka of Spectre, the James Bond film. Also, Belvedere vs Ciroc vodkas have won several awards. Belvedere won the Vodka Producer of the Year award in the International Spirits Challenge for three consecutive years from 2015 to 2017.

Company Overview Ciroc
Ciroc comes from France. It isa grape-based eau-de-view vodka which is now produced and distributed by Diageo, a British multi-national company. Since 2007, the marketing and promotion have been handled in an equal-share venture with Sean John “Puffy” Combs. The production takes place in the Charente-Maritime region.

The name “Ciroc” is a mash-up of two French words, cime (meaning peak or summit-top) and roche(meaning rock). It refers to the vineyards where the grapes for making the vodka are located, which is at the high altitudes of the Gaillac region.

Ciroc was founded by Jean-Sebastian Robicquet in 2003. His family, coming from the wine-growing region Bordeaux, has been in the wine business since the 17th century. He had studied winemaking before he moved to spirits. He had worked at Henessy for about ten years before Diageo approached him to make a unique vodka from grapes. For his accomplishment, he has received the title of Commander of Bordeaux from the Great Council of Bordeaux. 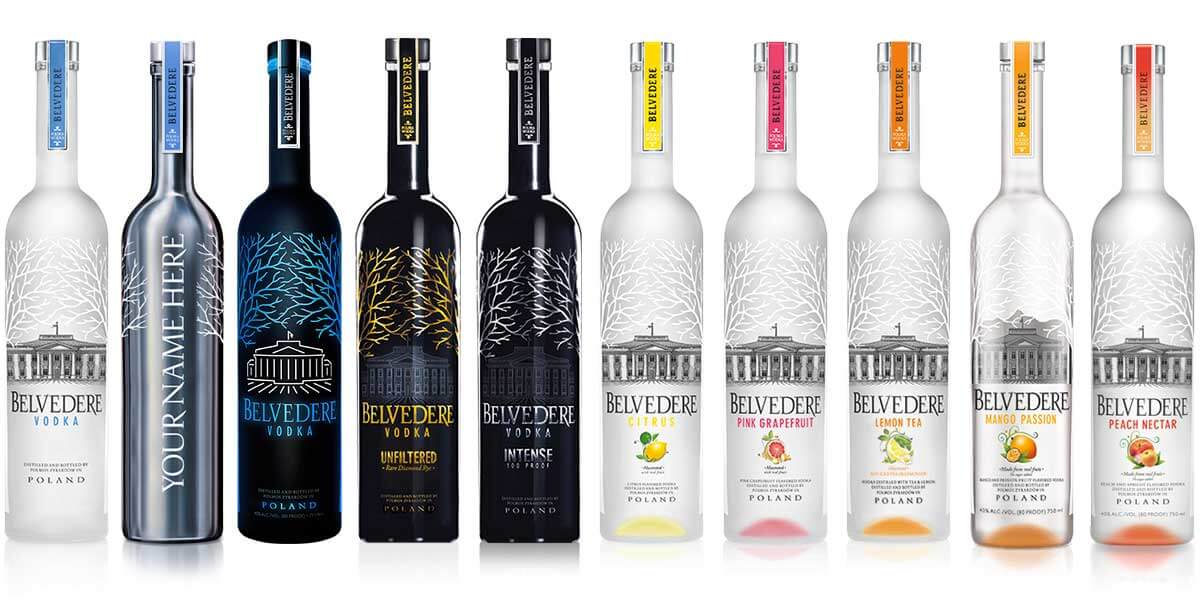 Ciroc is now considered as a luxury vodka brand. In 2011, it won the Spirits Brand of the Year from Market Watch Magazine. In 2018, the Ciroc French Vanilla flavored variety won the Best Flavored Vodka category from World Vodka Awards.

The Dankowskie rye that Belvedere uses is harvested from one of the nearby farms in the region. The company claims that they only use rye that is specifically grown for making luxury vodka. The rye is simmered into a mash, and then fermented and distilled in an agricultural distillery. Afterwards, the mash goes through the distillation process three more times in the Belvedere distillery.

The flavored versions of Belvedere are made using a maceration process. The pure spirit is mixed with a macerated fruit, and then distilled at a low temperature to make a macerate concentrate. Finally, the concentrated mix is blended with artesian well water until it reaches the right bottling strength. Belvedere is filtered with cellulose particles instead of charcoals to ensure that the essential oils that are responsible for the flavor and mouth feel won’t be lost.

Vodkas are typically made from grains, potatoes, or corns. However, the grape-based Ciroc is technically still a vodka because it is distilled at 96% without going through an aging period. So, yes, Ciroc is a vodka.

Ciroc is actually made from two types of snap frost grapes. The first one is Mauzac Blanc grapes, acquired from the Gaillac region. The second one is Ugni Blanc grapes, acquired from the Cognac region. The grapes are processed into juices and then fermented. They go through five times of distillation. Finally, they are blended with a precise ratio of 5% Mauzac and 95% Ugniand then sent to the final Armagnac-style distillation process.

Alcohol Level
Most vodkas have the same alcohol level, 40% ABV. The minimum level for a vodka is 37.5% ABV. Some vodkas go as high as 95% ABV. 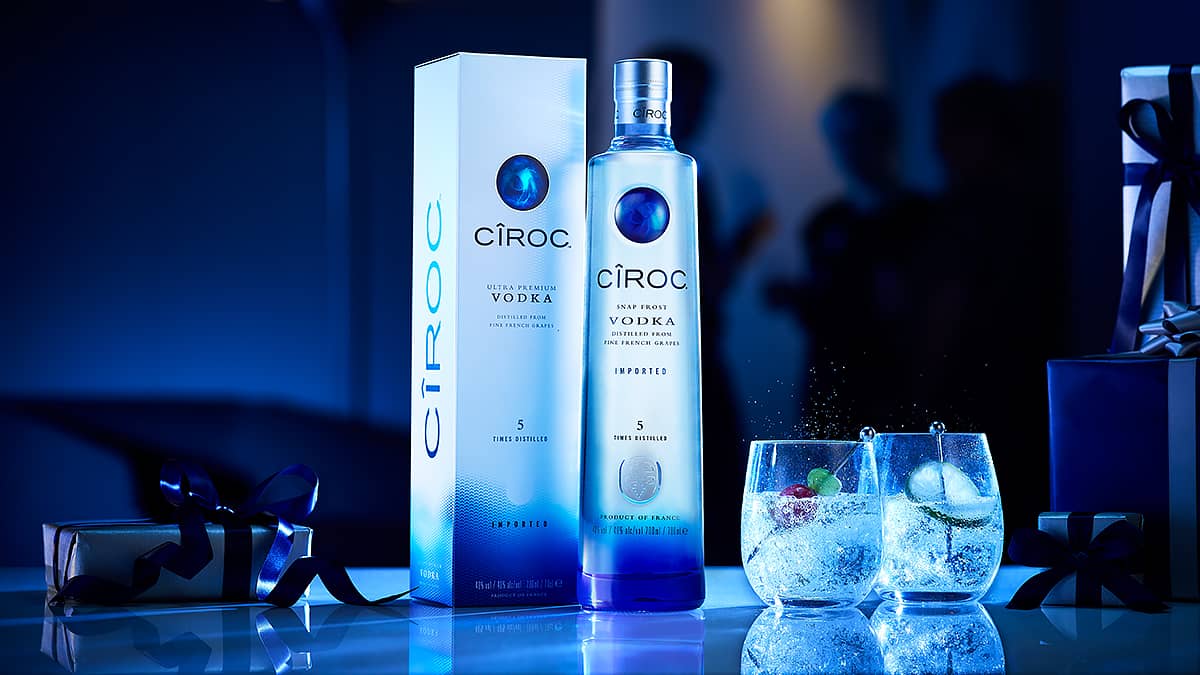 Just like most other vodkas, Belvedere vsCiroc have an alcohol level of 40% ABV. The Alcohol By Volume (ABV) value is measured by how many milliliters (mL) of pure alcohol that exists in 100 mL of the drink at 20oC. Although the ABV standard is used worldwide, some companies still use the Alcohol Proof standard to define the alcohol levels of their products. In the United States, the Alcohol Proof value is defined as twice the ABV value.

Aroma, Flavor, Texture Belvedere
If you sip Belvedere at a cold temperature of about 1oC, you will enjoy the texture and flavor very much. It is somewhat creamy and sluggish. It emits a mild aroma of lemony spiciness, but with a clean impression. When sipped, it will give you a soft lemon flavor, albeit with some bitterness as well. It is quite smooth, although it still burns a little.

When served at a higher temperature, Belvedere is surprisingly able to retain most of the impressive flavor profile. It still delivers soft lemon notes without becoming too vegetal or harsh. It also has an underlying cereal-like earthiness, which is definitely enjoyable.

The overall flavor profile is completely neutral. Hence, Belvedere is an excellent choice for mixing cocktails. It can add some alcohol into the cocktail without causing any significant vodka flavor, which is often detrimental for the cocktail. If you want to add some complexity, you can use one of the flavored variety, such as the Bloody Mary vodka which is specifically made for the cocktail of the same name.

Aroma, Flavor, Texture Ciroc
Cirochas a great overall flavor profile. Since it is made from grapes, unsurprisingly, it has a light fruity aroma and flavor. However, if you prefer a completely neutral vodka, then this is not the best choice for you.

The texture is smooth. You can drink it comfortably without any significant burn. The flavor is sweet with a slight sourness, almost like how a typical energy drink tastes. Later, the sweetness will hang around in your mouth. Obviously, it does not require a chaser.

Ciroc emits a delightful fruity note when put in an ice pick. It can be an excellent choice for some cocktails, but it is not very good for some others due to the sweetness clouding the overall flavor. As a rule, Ciroc makes an awesome pair with fruit juices, such as pomegranate, pineapple, cranberry, and blood orange.

Flavored Varieties Ciroc
Although the original version is made from grapes, this does not stop the company from making some flavored varieties. There are four flavored Ciroc variants, which are:
– Ciroc Peach Vodka
– Ciroc Red Berry Vodka
– Ciroc Amaretto Vodka
– Ciroc Coconut Vodka

Conclusion
If you prefer a neutral vodka, Belvedere is probably the better choice. It can be mixed for various cocktails without altering the flavor. However, if you can enjoy a sweet, somewhat fruity vodka, Ciroc can give you an amazing experience. Ciroc has a mild fruity aroma, and goes well with some cocktails especially the ones that use fruit juices.