Belvedere and Ketel One are two premium vodka brands that are quite popular in the market. You can easily find them on the top shelves of many bars. Some people believe that all vodkas taste the same, but Belvedere vs Ketel One do have their differences that set them apart. They are made from different ingredients and offer different flavors. 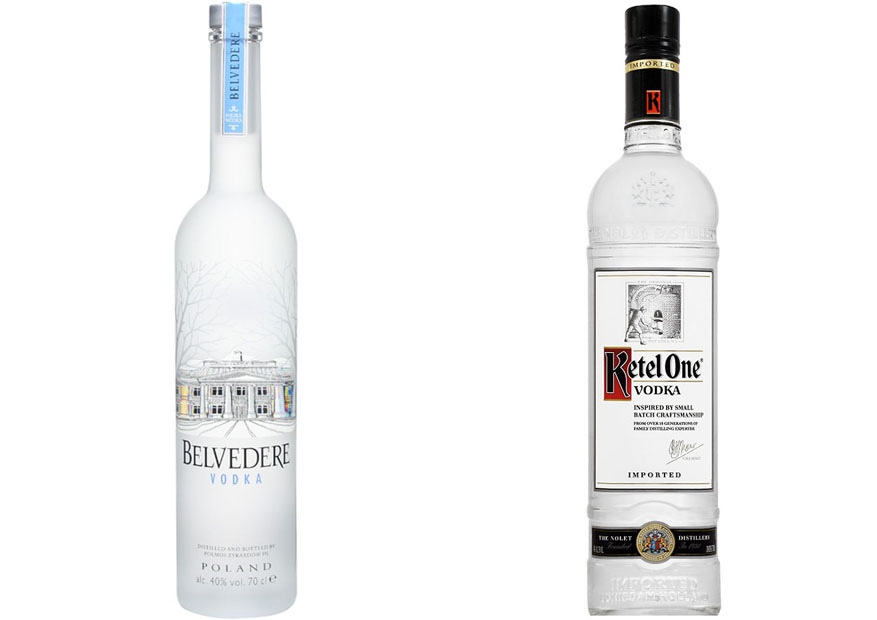 Belvedere: Brand Information
Belvedere is a brand of Polish vodka which is produced and distributed by LVMH. It is made of rye and produced in Zyrardow, Poland. It is named after the Polish presidential palace which is called Belweder, located in Warsaw. The famous picture on the bottle is actually an illustration of the said building.

Belvedere vs Ketel One is often considered as a luxury liquor. It has been marketed as the first super premium vodka in the world, but this term is rather vague and pretty much just a marketing label. Belvedere was launched in the United States in 1996; since then, it has partnered with several celebrities such as Usher, John Legend, Chelsea Handler, and Janelle Monae. It was chosen as the official vodka of the James Bond film, Spectre, in 2015.

The distillery that produces Belvedere was constructed in 1910. However, the production began in 1993. Belvedere was acquired by LVMH in 2005. Then, Belvedere began a partnership with Product Red in 2011, with half of the profits donated to the Global Fund for fighting HIV/AIDS, tuberculosis, and malaria. Belvedere has been awarded as the Vodka Producer of the Year for three consecutive years, with the latest one happening at the International Spirits Challenge in July 2017.

Belvedere: How the Vodka is Made
As mentioned above, Belvedere has been marketed as a super premium vodka. According to the company, in order for a vodka to be labeled as a super premium Polish Vodka, the vodka must be made from particular Polish potatoes or grains and Polish water. In addition, the official Polish Vodka label requires that the vodka does not use any artificial additive.

Belvedere is made from several varieties of the Dankowskie rye. The company uses rye that is harvested from one of the seven nearby farms within the area. It is said that the company only uses rye that has been grown for making luxury vodka.

In order to make the vodka, the rye that has been harvested is simmered to create a mash. Then, the mash is fermented and distilled inside an agricultural distillery. Afterwards, the mash needs to undergo three additional times of distillation in the Belvedere distillery.

The flavored vodka versions are produced through a maceration process. This is done by mixing the pure spirit of the vodka with a macerated fruit. Then, the mix is distilled at a low temperature level to create a macerate concentrate. Next, the concentrated mix is blended with some artesian well water from the distillery until it reaches the proper bottling strength.

Note that the Belvedere vodkas are not filtered with charcoals. Instead, it is filtered with cellulose particles before the bottling process. This is to ensure that the essential oils that are responsible for the fruit flavors and mouth feel aren’t lost. 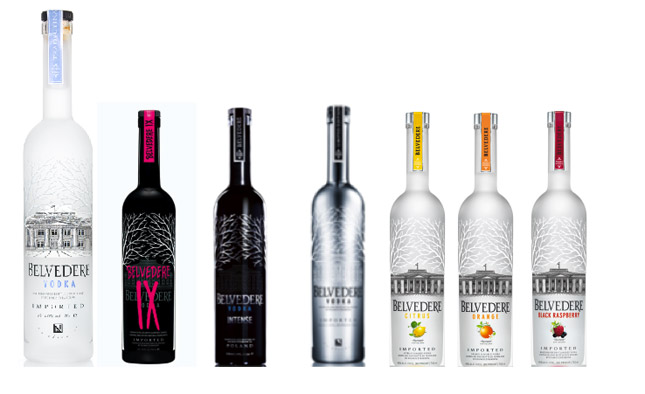 Belvedere: Alcohol Content and Flavor
When comparing Belvedere vs Ketel One, some people may wonder which vodka that actually contains more alcohol. Well, most companies in the world use the Alcohol By Volume (ABV) standard to measure how much alcohol that is contained within a beverage. This is a standard that is used worldwide. The ABV value is acquired by measuring how many milliliters of pure alcohol that is present within 100 milliliters of the liquid at a temperature level of 20o C.

Belvedere contains 40% ABV. This is pretty much similar to most other vodkas in the market. Compared to other alcoholic beverages in the world, vodka indeed has a high alcohol content. Hence, vodka can make you drunk and cause hangover symptoms more easily than other liquors.

Belvedere: How To Drink
Most people who love Belvedere suggest that you drink it straight. If you are a beginner, you may be confused about what ‘straight’ means. The meaning of ‘straight’ sometimes depends on the type of the liquor.

When we are talking about vodka, ‘straight’ usually refers to the pure pour for one shot of the liquor without any addition. In other words, Belvedere is usually served without any added ice. It isn’t commonly mixed with other beverages.

Ketel One: Brand Information
Ketel One is a brand of Dutch vodka which is produced in the Nolet Distillery in Schiedam, the Netherlands. It is actually named after the original coal-fired copper pot still, which was called Distillerketel #1. This brand has been around for a long time, as it was first introduced in 1691.The Nolet Distillery has belonged to the Nolet family ever since the founding in 1691.

The family started to export their products in 1867. By the end of the 1800s, the Schiedam town was famous for its alcohol industry and had more than 400 distilleries. However, the town was hit hard by World War II. There were only 40 distilleries left by the end of the war. Changes in technology, consolidations, and mergers eventually left Nolet as the only one distillery currently still operating in Schiedam.

Ketel One has experienced a significant growth under the leading of Carolus Nolet, who is the tenth generation of the family. He took over the company in 1979. At this point, the company was producing a wide range of spirits. However, Carolus Nolet changed the company’s focus to producing only one product in order to make it as best as possible. The company started to produce Ketel 1 Jenever, which has become the best-selling jenever brand in the Netherlands. 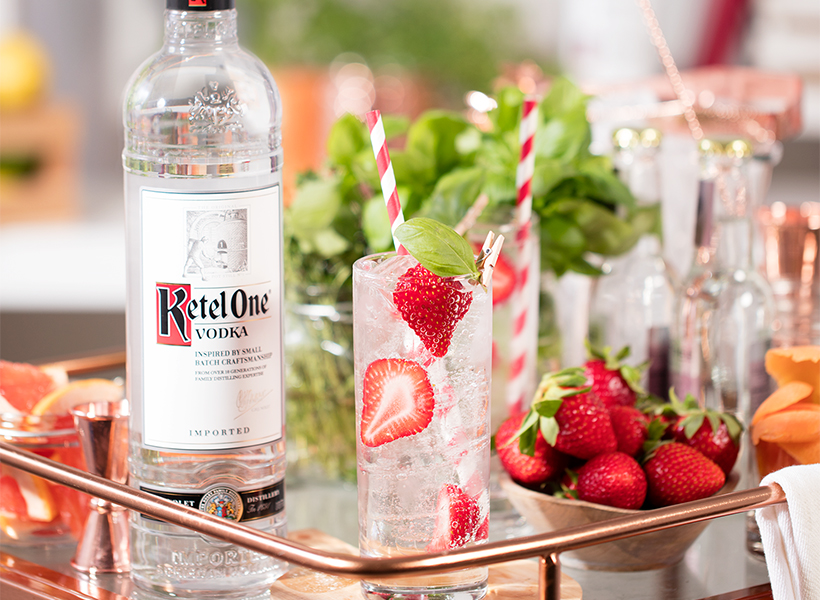 Nolet entered the United States once in 1902, but was forced to close its operation there in the prohibition era. Nolet entered the United States for the second time in 1983 by launching the Ketel One vodka in San Francisco. Instead of advertising to consumers directly, Nolet tends to promote their products through bartenders and distributors.In 2014, Ketel One got the second place in the Brand Keys Customer Loyalty Engagement Index.

Ketel One: How the Vodka is Made
When choosing between Belvedere vs Ketel One, note that they are made from different ingredients. Hence, they may have slightly different flavors. They also have different flavored versions.

The Ketel One vodka is made from 100% wheat. It is distilled in copper pot stills and is processed in small batches. After the distillation, the liquid is filtered through loose charcoal. Finally, the liquid is put to rest in tile-lined tanks until it is ready for the bottling process.

Besides the standard unflavored vodka, Ketel One also offers two flavored versions, which are Ketel One Citron and Ketel One Oranje. In addition, there is also the Ketel One Botanical line which has unique flavors, such as rose, cucumber and mint, peach and orange blossom, and grapefruit.

Ketel One: How To Drink
There are two common ways for drinking Ketel One. First, you can drink it straight. Many people prefer this method because they don’t want to spoil the flavor of the premium vodka drink. Second, it is sometimes used in cocktails.

Although not many people are fancy of the idea, there are actually some cocktails that are made by mixing the Ketel One vodka with other liquids. For example, there are Ketel One Vodka Martini, Citrus Thaipiroshka, Minted Man, Banker’s Lunch, and Harvest Highball.

Belvedere vs Ketel One