Which one is the better vodka: Ciroc or Grey Goose? In this article, we are going to discuss the comparison of Ciroc vs Grey Goose vodkas to find out which one that suits you best. Both are produced in France, but they are made from different ingredients. Just like other vodkas, their flavors are similar with just very slight differences.

Ciroc: Company Information
Ciroc is a French brand of grape-based eau-de-vie vodka manufactured in France, more precisely in the Charente-Maritime region. However, it is actually produced and distributed by a British-based multinational company, Diageo. Meanwhile, the marketing and promotion have been handled in an equal-share venture with Sean John Combs alias Puffy since 2007, with the profits being split between Diageo and Puffy. See also: Belvedere vs Ketel One.

The Ciroc brand was first introduced to the market in 2003.The name “Ciroc” comes from the mash-up of two French words, cime (which means summit-top or peak) and roche(which means rock).It is named so as a reference to the vineyards which are located at a high altitude in the Gaillac region. This is the place where the grapes for making the vodka are grown and cultivated.

Ciroc was actually founded by Jean-Sebastian Robicquet. His family has been in the wine business since the 17th century, and comes from Bordeaux which is known as a wine-growing region.

Robicquet has studied wine making before moving to spirits. He worked for the French cognac maker, Hennessy, for ten years before he was approached by Diageo to make vodka from grapes instead of the usual potatoes or grains. For his accomplishment in the field of wine and liquor, Robicquet has been recognized as a Commander of Bordeaux by the Great Council of Bordeaux.

Ciroc: Ingredient and Production Process
One of the biggest differences of Ciroc vs Grey Goose is their ingredients. Ciroc is an eau-de-vie vodka, whereas Grey Goose is an actual vodka. For the general audience, they don’t have significant differences, as they still have very similar flavors.

So, what is an eau-de-vie? It is a French term for spirits, and its literal meaning is “water of life”. An eau-de-vie is actually a clear and colorless fruit brandy that is produced from fermentation and distillation. The drink typically has a very light fruit flavor.

Ciroc is different compared to other vodkas because it is derived from grapes instead of the usual potatoes, grains, or corns. It can fulfill the required qualities to be called a vodka because it is distilled at 96% without any aging period. So, technically, Ciroc is still a vodka, although it does have its differences compared to most other drinks in the category. 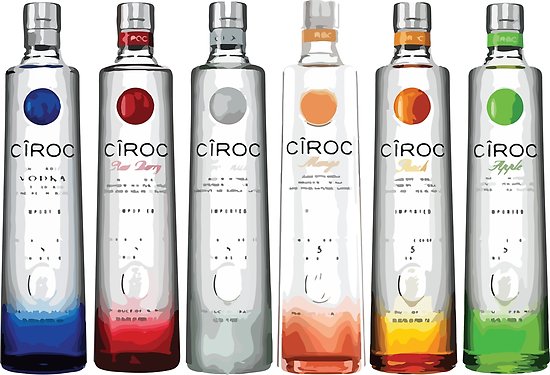 Ciroc: Aroma and Flavor
Although most vodkas taste very similarly, some people with keen senses or rich experience will swear that Ciroc vs Grey Goose have different aromas and flavors. This is actually not surprising because Ciroc is made from grapes. It has a light fruity aroma and flavor.

Ciroc generally tastes smooth and sweet. It is almost like the taste of an energy drink, which isn’t a bad thing. The sweetness tends to hand in your mouth. It does not require a chaser.

In an ice pick, Ciroc unfolds a delightful fruity hint. This is why Ciroc is very popularly used for cocktails, even though people also drink it straight. In a screwdriver, Ciroc is fine, although the vodka’s sweetness does not really promote the quality of the screwdriver. However, if you add some pomegranate juice into the screwdriver, the whole thing becomes awesome. Apparently, Ciroc pairs really well with fruit juices.

These flavored versions are also great. Their additional flavors pair well with the inherent sweetness and grape aroma of the vodka. However, if you prefer the original vodka flavor which is clear and pure, Ciroc is probably not the best drink for you.

Grey Goose: Company Information
One similarity between Ciroc vs Grey Goose: they both come from France. Indeed, Grey Goose is produced in the Cognac region, but the wheat for the creation of the vodka comes from Picardy. Just within a year after its first release, Grey Goose was given the title of “the world’s best tasting vodka” by the Chicago Beverage Testing Institute.

Grey Goose was founded by Sidney Frank, the same person who founded Sidney Frank Importing Co (SFIC). He came up with the idea of creating a luxury vodka for the American marketplace in the summer of 1996. Then, SFIC partnered with the French cognac producer Francois Thibault in order to start the production. In 2004, SFIC sold Grey Goose to Bacardi. 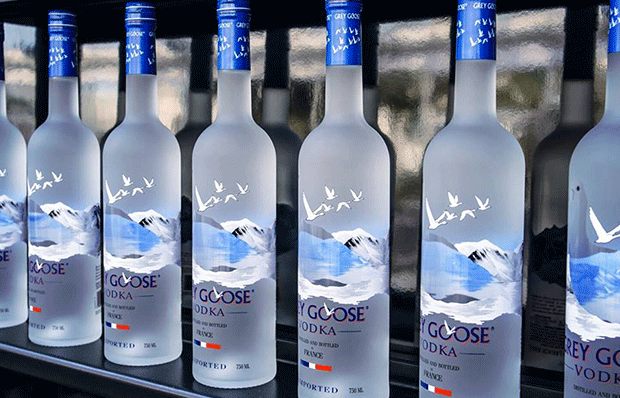 The company chose France as the basis of production in order to distinguish itself from the other vodkas, which mostly come from Eastern Europe. Grey Goose uses the water from select natural springs in France, which is then filtered through Champagne limestone and processed with local French wheat. The bottle is also quite distinctive with a smoked glass material featuring French geese in flight. The bottles are distributed in wooden crates, just like wine.

The company’s aim to create a luxury vodka has been reached. Grey Goose is about four to five times more expensive than the competing vodka brands. However, it still remains popular among aspirational people and the economic elites.

Grey Goose: Ingredient and Production Process
Grey Goose is a wheat-based vodka. The wheat is grown in Picardy. The distillation takes place in the same region before the distilled product is sent to Cognac to be blended with spring water and then bottled. According to the company, the wheat for making Grey Goose is soft winter wheat and categorized as superior bread-making wheat.

The carbohydrates in the wheat are broken down by enzymes into fermentable sugars. The fermentation process is done within six cascading tanks, and the wash is then distilled into spirit through a five-step process. Meanwhile, the water for the vodka comes from a natural spring located 150 meters below the Cognac facility. The spring is lined with limestone, hence producing calcium-rich spring water. The water is filtered before it is blended to make the vodka.

Grey Goose is the first vodka that is produced by using the Maitre de Chai tradition. According to the company, it allows the distillation process to create aromas specific to the Grey Goose vodka. The vodka, including all of the flavored varieties, is made from 100% French ingredients.

Grey Goose: Aroma and Flavor
Nevertheless, in terms of aroma and flavor, Grey Goose does not have any special thing. One thing that is correct about the Grey Goose vodka is that it has a smooth texture. However, it is not exactly a good-tasting vodka. It starts with a slightly bitter taste. Then, it becomes more bitter in your mouth. Afterwards, it becomes even more bitter after it goes down. While it does not burn, there are other vodkas that taste better.

A chaser is not really necessary for Grey Goose. However, having one is a wise idea.

The smooth and relatively clear flavor profile of Grey Goose makes it a viable option for mixing vodka cocktails. It works well in cocktails like Espresso Martini, Le Fizz, and Scarlet Punch. It can work fairly well in the Simply Orange screwdriver, but it will dilute the sweet flavors with its bitterness. However, it is not a very good choice if you want to add some complexity into the flavor mix.

The flavored variants are pretty good. The Le Citron variety is a lemon-flavored vodka, and the lemon notes add some enjoyable touches to the bitterness. The Cherry Noir variety is flavored with black cherry, whereas the L’Orange is flavored with orange. The La Poire variety is quite unique because it is inspired by a pear tarte from a Parisian pastry chef.

Conclusion
Between these two vodkas, Ciroc is generally more recommended. It has a unique taste with slight fruity notes, which come from the grape ingredient. It is sweet, and it does not require a chaser.