There are so many brands of so called zero calories available in the market and all of them go with the same benefit which is helping you to control blood sugar level and manage calorie intake. In today Erythritol vs Truvia article, we are going to give you information regarding these two sweetener and what they can offer to you as well as what separate them from each other. If you are interested, you may want to check our article below. 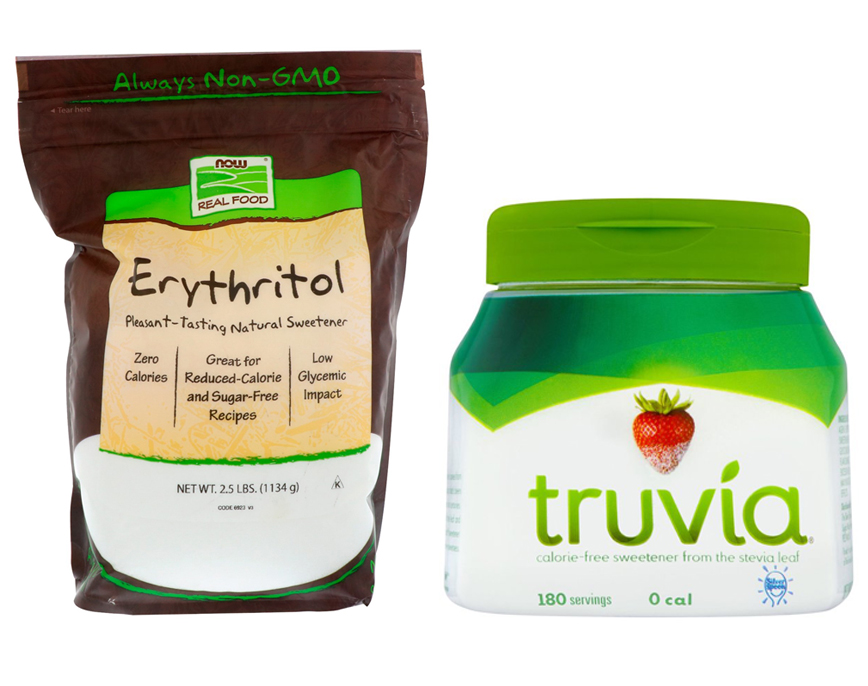 Sugar Bad Effects
Sugar has been deemed as the culprit to so many health problems. It has nothing than calories; it has no proteins, fat, vitamins or minerals and there is no need for it to be included in your diet. Sugar is known to interfere the hormone in your body that regulate hunger and satiety, so you will feel less and then consume more which is of course will lead to weight gain. It is also bad for metabolism since it can increased insulin and fat storage.

People who consume much sugar also said to have higher risk to the world’s most deadly diseases like heart disease, cancer and diabetes. Another bad news from sugar is it is give similar effect like addictive substance because it will make your brain released dopamine and can lead to cravings as well as overeating.

About Erythritol
To overcome these issues, people are choosing to use zero calorie sweetener such as Erythritol. This is actually not a brand of sweetener like some of you may think, but it is a substance that has the same or at least taste just as sweet as sugar if not sweeter. It has very low calorie, not exactly zero but won’t affect your blood sugar level since the number is counting only at 0.24 per gram compared to regular table sugar with its 4 calories in the same amount. 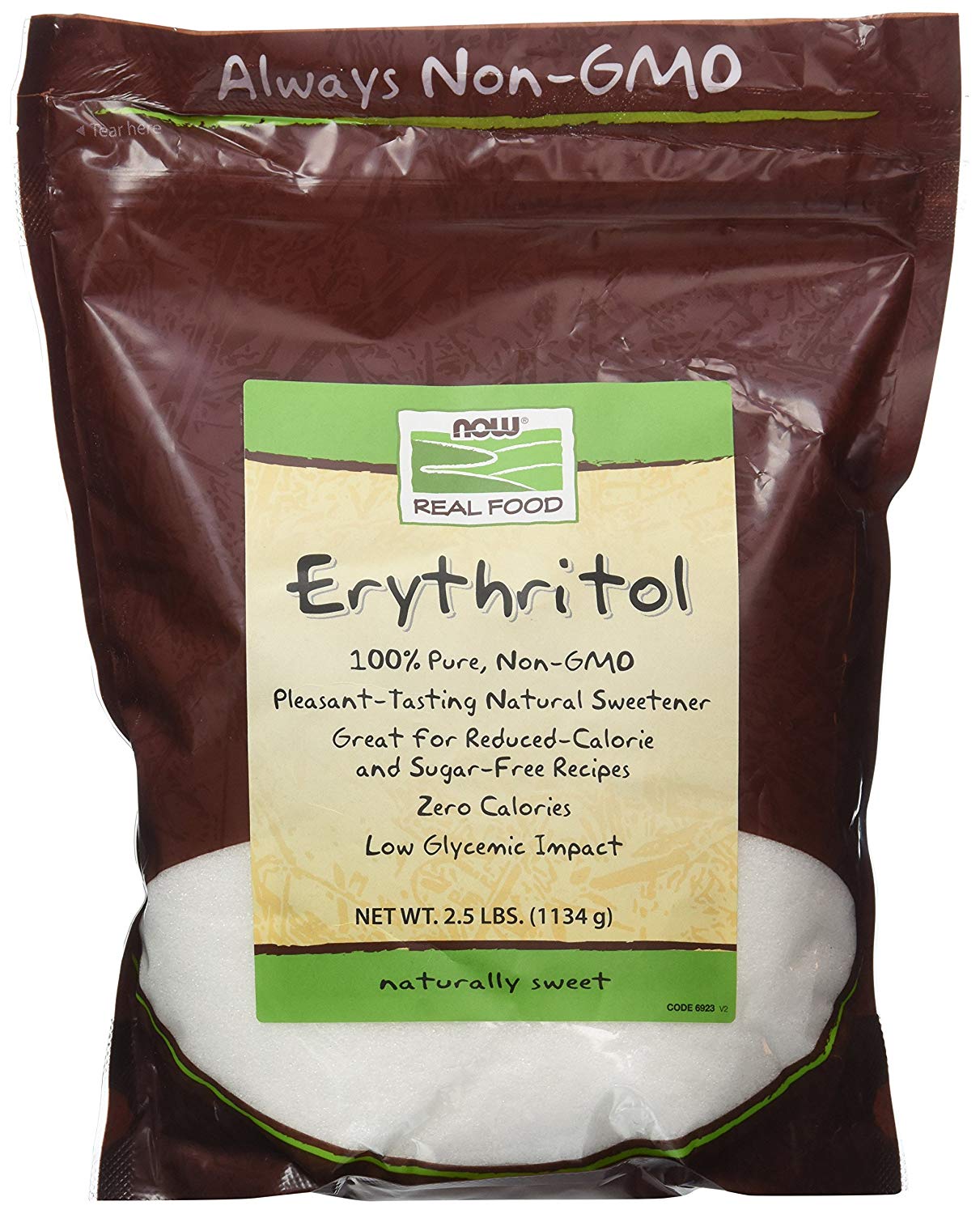 So, what is exactly this Erythritol. Taken from healthline, this substance belongs to a class of compounds called sugar alcohols, same like xylitol, sorbitol, and maltitol. These sweeteners are very popular used in low-calories products and also occurs naturally in nature such as those in vegetables and fruits but only in a small amount. It tastes sweet because the molecules are structured to give them the ability to stimulate the sweet taste receptors on your tongue. Compared to other type of sugar alcohol, Erythritol has far fewer calories than the others.

Erythritol Benefit
The best benefit of Erythritol is it won’t spike blood sugar or insulin because our body doesn’t have the enzymes needed to break it down resulting the substance absorbed in the bloodstream and excreted unchanged in the urine. If consumed by people with no health issue, this substance showed to have no effect on either triglycerides, cholesterol or other biomarkers. But when consumed by people with obesity or overweight, it can be a good alternative to sugar.

Overall, Erythritol is safe to be consumed and no serious effects have been detected even after long-term feeding in high amounts test on animals. However, it doesn’t mean there is no concern about other side effects. Erythritol is safe to consume but due to the unique chemical structure and our body inability to digest, it can produce gas when fermented in the colon by the bacteria, so it may cause bloating and other digestive problem.

About Truvia
Another zero calorie sweetener you can try to help you maintain sugar intake is Truvia, which is claimed to be natural and will help you manage that blood sugar level. This brand of sweetener is owned and developed by Cargill and Coca Cola and one among the top selling zero calorie sweetener in the United States together with other brand Splenda. Go check what are their difference in our Truvia vs Splenda here. Even though, Truvia is labeled as natural, it is good not to mistake them with Stevia since they are very different. 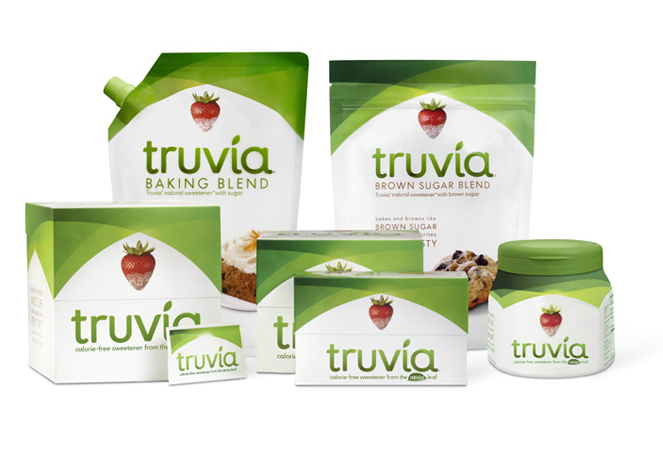 Truvia Ingredients
What you often hear about Truvia is it is natural and made from Stevia but it is not 100% true because as you can see on their label. It is made mainly with Erythritol followed by Stevia leaf extract, and natural flavoring thus it is actually not pure Stevia extract. In the past, the brand use Rebiana to call this plant extract since the extract of than plant itself consists of stevioside and rebaudioside A. The one with health benefit is stevioside which told to lower blood sugar and reduce blood pressure.

Since it is made with erythritol, it will have the similar taste and calories like the pure substance but because it is also added with other ingredients like the stevia leaf extract and natural flavor, Truvia also tends to give a bit different taste from pure erythritol and still has a little bitter aftertaste. However, the last case may differ from people to people since some able to distinguish it and some not.

There is no clear information regarding the natural flavoring they used but the site mentioned that it is used to bring the best taste from the sweetener and similar to the likes of pepper and salt. Unlike the sweetener made with sucralose, unfortunately, erythritol is less versatile especially when used for cooking because it can’t retain the taste when exposed to heat.

Truvia Benefit
The prominent benefit of Truvia is it only have a very small amount of calories and won’t affect your blood sugar because again, it is mainly made with erythritol. It is also good to keep your weight in check since it is almost impossible to consume it high enough to affect your weight.

Comparison
Now, let’s compare Erythritol with Truvia. As you may already know, Erythritol is a type of sugar alcohols and depend on the brand you pick, there will be a label indicate if it is composed with 100% of the substance or mixed with other ingredients. It is very low in calorie, about 0.24 per gram. At the other hand, Truvia is indeed mainly made with Erythritol but also mixed with stevia leaf extract and natural flavoring to enhance the taste. However, the calorie should be the same.

Conclusion
All in all, the decision is all yours to make. In our opinion, both of them can be used as a healthier substitute to sugar which packed with calories. If you are not sure yet, try them one by one and pick the one taste better for you.