Coffee has become a popular lifestyle drink nowadays. You may love the caffeine, flavor, or both. However, there are many different kinds of coffee, and you want to try the best one instead of ordering the same thing over and over again. In this article, we will help you understand the differences between espresso vs americano. 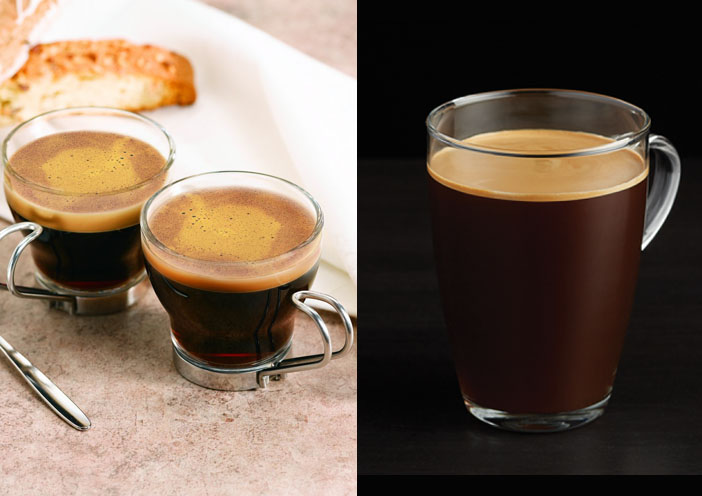 What is espresso?
Espresso is a very strong dark coffee. It is generally thicker than other kinds of coffee brewed by other methods, and it usually has a higher concentration of dissolved and suspended solids with a layer of crema (foam with creamy consistency) on the top. It is served in smaller portions, either in one- or two-ounce cups. It is also used as the base for many other coffee drinks, such as americano, macchiato, latte, cappuccino, mocha, and flat white.

Espresso is made by using a special coffee maker. During the process, the ground coffee is packed into a metal filter with pressurized, nearly-boiling water running through it. By forcing out a small amount of such water through the finely ground coffee, you can extract very rich coffee.

Contrary to the common belief, espresso actually contains a smaller amount of caffeine than standard brewed coffee. It is true that espresso has more caffeine per unit volume than other coffee drinks, but don’t forget that the serving size is rather small. Of course, the actual caffeine content of a coffee drink depends on several factors such as the size, origin, and roast method, but a typical serving of espresso usually has 120 – 170 mg caffeine.

The history of espresso
The brewing method of espresso has been performed for a very long time. According to Wikipedia, the word “espresso” itself is an Italian word which means “to force out” or “to express”. There is another term popularly used, “expresso”, but this spelling is considered incorrect by many experts as the letter x is not a part of the standard Italian alphabet.

People in Italy simply refer to it as caffe because it is the usual coffee to order. In Spain, the usual way to order it is cafe solo, indicating that the coffee is served without milk.

The first steam-driven instantaneous coffee maker was patented in Turin in 1884 by Angelo Moriondo. This is believed to be the first Italian bar machine with controlled steam and water supplies. Espresso became popular in the United Kingdom in the ’50s, particularly in the form of cappuccino. It became popular in the United States in the form of latte. Throughout the ’80s and ’90s, it was popularized in Seattle, then nationally and internationally, by Starbucks.

The flavor of espresso
As mentioned above, espresso is a very strong coffee. It has a rich flavor. Note that the precise flavor depends on the bean and roast. With a darker roast, the taste is more intense and bitter. With a lighter roast, the taste is less acidic. In most cases, the flavor strength of espresso alone can help you to feel more awake, in addition to the caffeine.

Espresso’s main variables are the size and length. Many cafes have standardized shots of varying sizes and lengths, but they usually only vary the number of shots used in the coffee drink. This is because changing between a double and triple only requires the changing of the filter basket, which is relatively easier. Changing between normale, ristretto, and lungo requires the changing of the grind, which is more difficult. A finely-tweaked grind is a crucial aspect for consistent espresso quality.

What is americano?
The difference between espresso vs americano may be simpler than you think. Americano is watered-down espresso. If you can’t handle the intense strength of espresso, americano is a great alternative which allows you to enjoy the rich flavor with just a fraction of the strength. Americano has a strength that is similar to traditionally brewed coffee, but with a different flavor. (See also : Americano vs Cappuccino)

Americano is made by diluting espresso with hot water. You can make it by pouring espresso into a cup of hot water or by pouring the hot water into the already brewed cup. Either way, the result is the same. In the United Kingdom and Italy, a typical serving of americano uses about 1 – 16 fl oz hot water and double espresso. 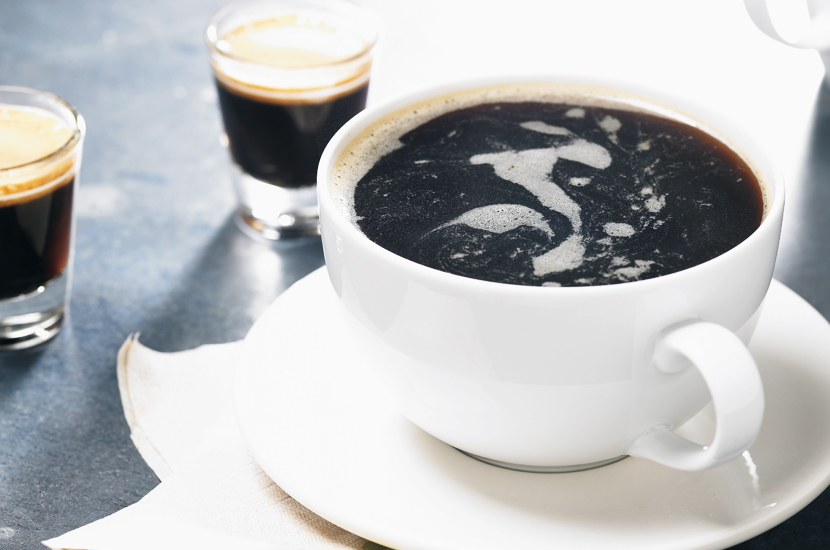 Of course, americano has a similar caffeine amount as the espresso used as the base. The added water simply lowers the flavor intensity and the amount of caffeine per unit volume.

The history of americano
As you may have expected, the word “americano” means “American”. It came from either American Spanish or Italian in the ’70s. There is a popular yet unconfirmed belief that the name of this drink became popular during World War II. At that time, American soldiers in Italy would add hot water to espresso in order to estimate the coffee to which they were accustomed. After all, the term “caffe americano” means “American coffee” in Italian.

In Australia, people refer to espresso as “short black” and americano as “long black”. There is an emphasis on the preparation order. The hot water is added into the cup first before pouring the espresso. Meanwhile, in the western United States, people use the term “italiano” for short americano with 1:1 espresso/water ratio.

Nevertheless, there are several variations of americano. Iced americano combines espresso with cold water, rather than hot water. Meanwhile, lungo is made by extracting the espresso with more water to give more volume, but this also extracts some bitterness. Caffe crema is made in a similar fashion as lungo but significantly longer. Finally, “red eye” or “a shot in the dark” is made by using drip coffee rather than hot water.

Conclusion
Now, you understand the differences between espresso vs americano. Espresso is a very strong dark coffee with great flavor intensity, usually served smaller portions. On the other hand, americano is watered-down espresso. It is made by adding hot water into espresso. It has a lower strength and higher volume, but the total caffeine amount remains similar.