There is one common question among beginners and newcomers in the coffee world. What is the difference between frothed milk vs steamed milk? At first, the two seem to be similar, and their differences are not significant. However, such thinking isn’t true, as frothed milk and steamed milk have differences that are required for different drinks. 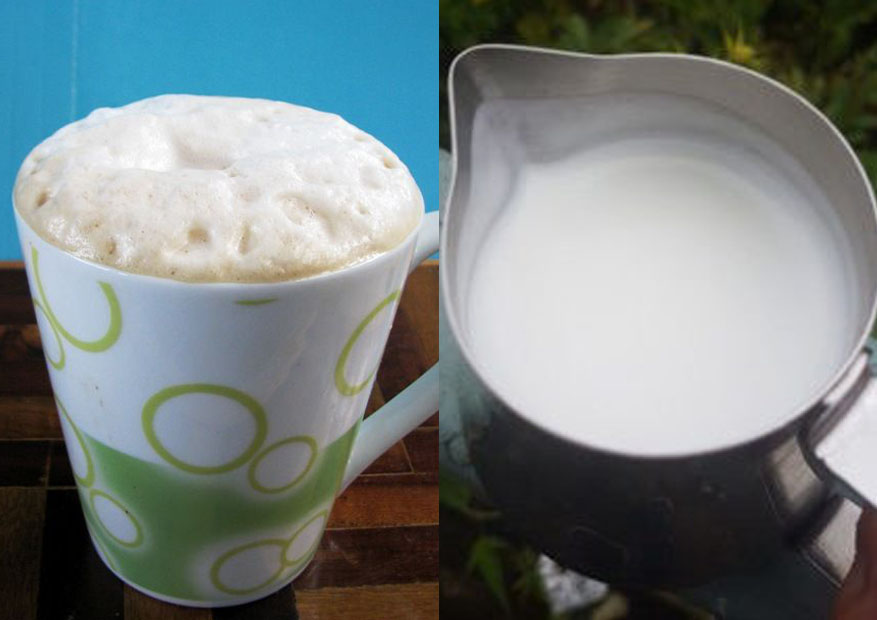 What is Frothed Milk?
Frothed milk, also known as foamed milk, is a result of taking heated milk into vigorous shaking or mixing to add air and texture into the milk. The rapid movement during the shaking or mixing will bring air into the milk and separate the milk into two layers; the bottom one is liquid milk and the top one is thick frothy foam. Many drinks use the foam as a topping, such as Latte Macchiato vs Latte.

Frothed milk can be made easily using a closed container. Just put the milk into the container and shake it vigorously. Or, you can use a handheld milk frother, which looks like a simple stick with a wide circular tip. However, many people believe that the best texture is created using a steam wand or an automatic electric frother.

When using a steam wand of a coffee machine, frothed milk is made by heating the milk while injecting air into the milk. During the process, the steam wand creates a vortex which spins the milk to heat it evenly. In addition, the steam wand also releases air which creates small bubbles in the milk. You need to lower the frothing pitcher continually as the milk expands, so that the tip of the steam wand remains just above the surface.

Compared to steamed milk, frothed milk is lighter with significantly more volume. After frothing, the volume may become three or four times larger than the original amount. This is because frothed milk contains much more air. According to Wikipedia, the thick foam is also known as macrofoam or dry foam, in contrast to steamed milk’s microfoam. Frothed milk is used to create body and thickness. 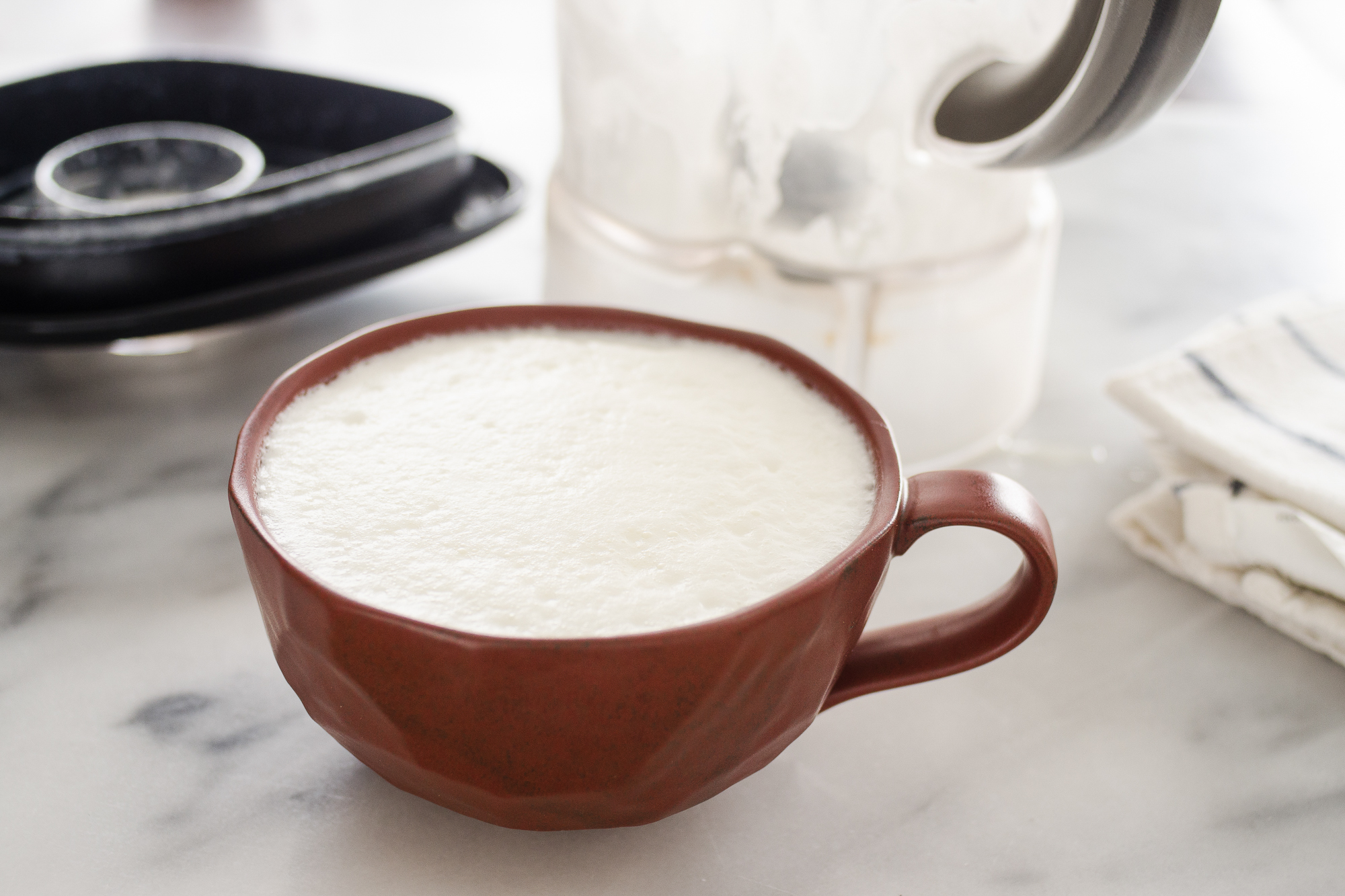 Latte may also use a small amount of frothed milk. It may consist of 1/3 part espresso, 2/3 part steamed milk, and just a thin layer of frothed milk on the top. This enables you to create latte art on the top more easily. Finally, mocha may also be topped with frothed milk.

Tips for Making Frothed Milk
To make the best frothed milk, you should start with cold or chilled milk. This is because colder milk gives more foam and generally better results. Don’t forget to purge the steam wand before starting the process. The ideal temperature range to make frothed milk is 140 – 155 degrees Fahrenheit.

You also need to consider the type of milk to use. Non-fat or skimmed milks are very easy to froth, but those milks aren’t very flavorful. On the other hand, whole milks can produce flavorful froths, but these milks are much heavier and more difficult to froth. 2% milks are generally preferred because they froth well and are quite tasty.

What is Steamed Milk?
On the other hand, steamed milk is made by heating milk using pressurized steam. The process heats the sugars in the milk evenly and also breaks down the fats in the milk. As the fluid breaks down while being evenly stirred, uniform air bubbles are created. These uniform air bubbles are known as ‘microfoam’, and it has a silky and velvety texture. It combines the foam and the milk into a cohesive unit.

In order to make steamed milk, you don’t have many options. You can only use a steam wand. You also need a thermometer to monitor the temperature. When buying a coffee machine, you may want to make sure that it has a steam wand, so that you’ll be able to make milk-based coffee drinks. 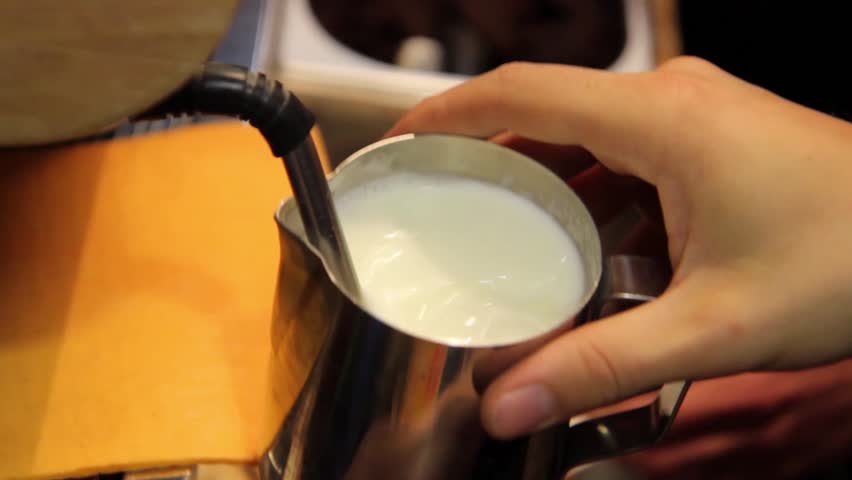 Nevertheless, using a steam wand, steamed milk is relatively easier to make. You just need to place the tip of the steam wand just under the surface of the milk. Position it in a way to create a vortex to spin the milk. This is to ensure that the milk is heated evenly. Use a thermometer to know when the milk has reached an ideal temperature, so you know when to stop the steaming.

Compared to frothed milk, steamed milk is much denser with significantly less volume. Steamed milk does not have thick foam; instead, it has smaller and more uniform microfoam. It is used to develop flavor and texture.

Drinks that Use Steamed Milk
Steamed milk is used by a wide variety of drinks. The most well-known one is latte. As mentioned above, latte may consist of 1/3 part espresso and 2/3 part steamed milk. For this drink, the espresso and steamed milk are mixed into one to create a toned-down flavor and smooth texture. The frothed milk is mostly only for ‘decoration’.

Tips for Making Steamed Milk
When using a steaming wand of a coffee machine, you should tilt the pitcher slightly to allow the milk to spin and roll. This allows the milk and foam to mix and create smoothness.