In this article, we are going to compare two incredibly popular vodkas in the United States, which are Grey Goose vs Titos. Well, although they both are famous and loved by many people, there is a significant price difference that sets them apart. Is Grey Goose really worth the expensive price? Should you just stick with Titos? Find out below. 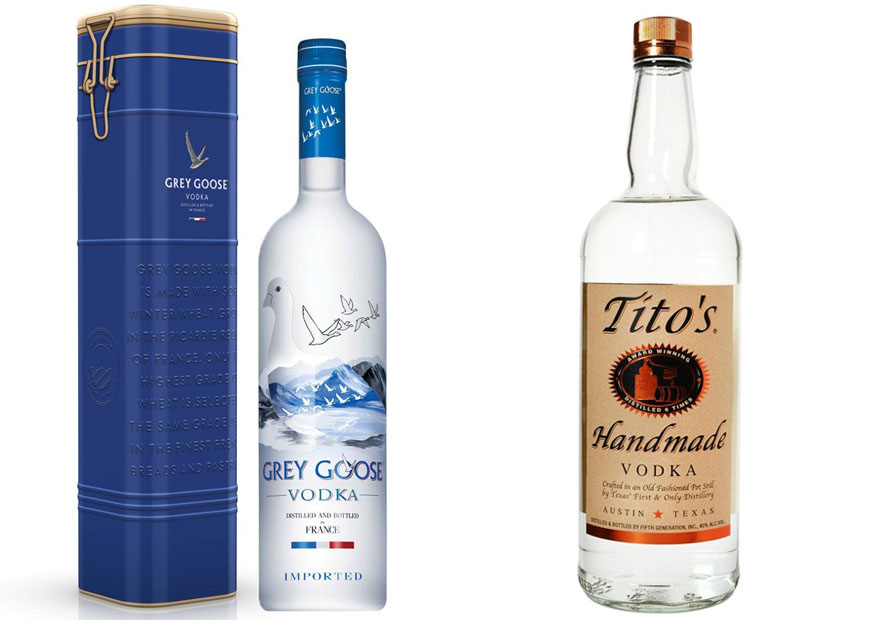 Company Background
Let’s begin by taking a look at the companies that produce Grey Goose and Titos vodkas. While both brands are very popular in the United States, they come from different countries. They also position themselves differently. See also: Ciroc vs Grey Goose.

Grey Goose is a vodka brand which is produced in France. It was founded by Sidney Frank in the 1990s. He wanted to make a luxury vodka to sell in the American marketplace. Through his company, Sidney Frank Importing Co (SFIC), he partnered with the French Cellar Master, Francois Thibault, to start the vodka production.

He chose France as the basis of his vodka production in order to distinguish Grey Goose vs Titos from other vodkas, which mostly came from Eastern Europe. He also developed a distinctive smoked glass bottle with a picture of French geese for the vodka, and distributed the bottles in wooden crates in a way that is similar to wine.

In 1998, Grey Goose was awarded as the world’s best-tasting vodka by the Chicago Beverage Testing Institute. In 2004, Sidney Frank sold Grey Goose to Bacardi, which manages the production and selling since then. It is now among the best-selling premium brands in the United States. However, many experts believe that Grey Goose is popular only as a status item. It is perceived as an economic elites’ drink. The price is four to five times higher than other competing brands.

Titos, on the other hand, is produced by Fifth Generation in Austin, Texas, the United States. It was created by Bert Butler “Tito” Beveridge II in 1997. It has been marketed as “Tito’s Handmade Vodka” because it was originally craft-distilled in pot stills.

However, the company is now producing the vodka in an advanced facility with ten huge stills. This has caused some controversy regarding the “handmade” labeling. Since the regulating bureau does not have any definition for “handmade”, Titos Vodka is allowed to continue with the marketing strategy.

Titos Vodka was awarded the Double Gold Medal for vodka in the 2001 San Francisco World Spirits Competition. In the same year, it got a four-star rating from Spirit Journal. It got a four-star rating again in the 2007 edition. Starting from 2013, the United Airlines only serve Titos for their inflight vodka beverages. Titos is currently sold in the United States and Canada, and holds 7.1% of the United States’ vodka market as of 2017. 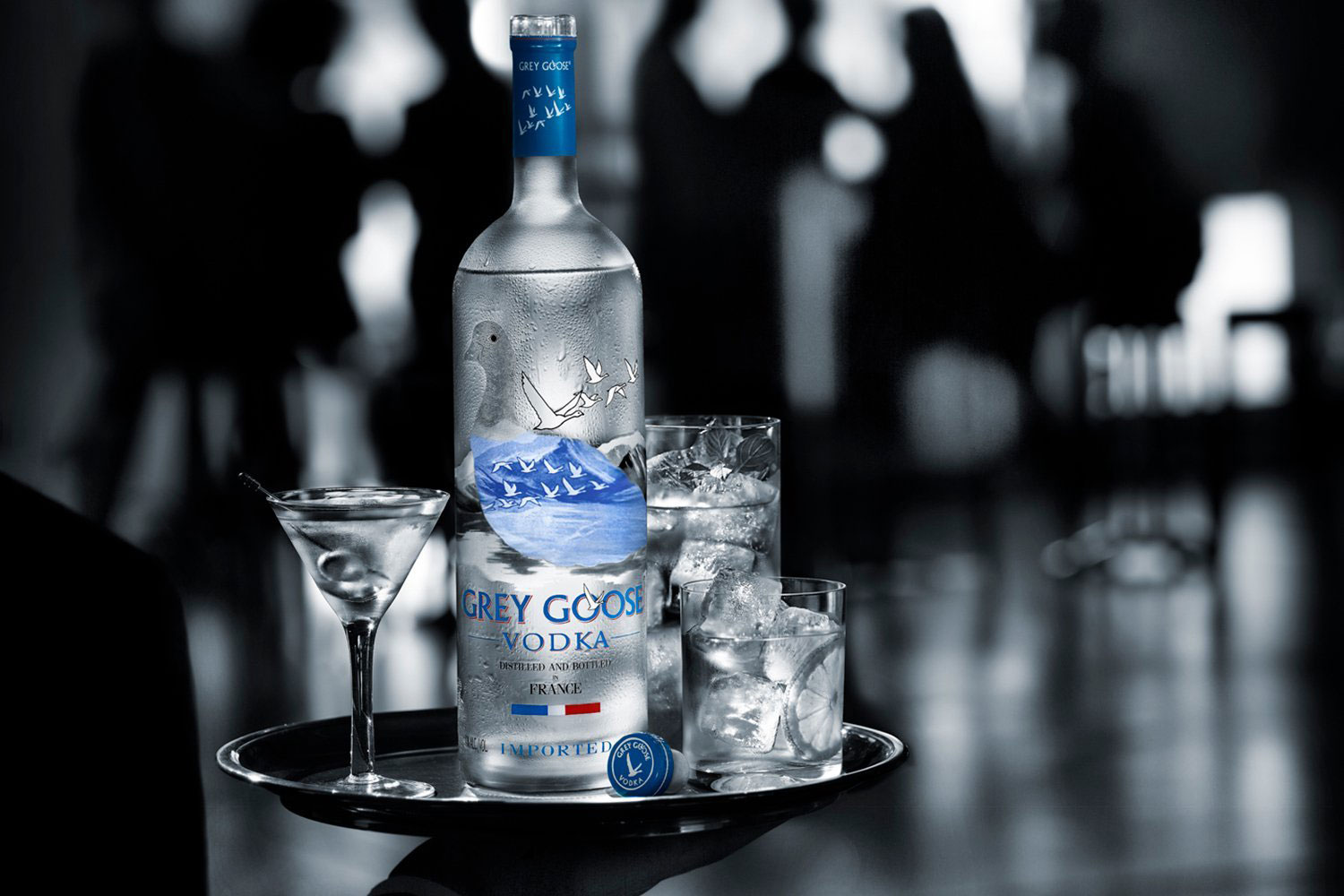 Ingredient and Production
Of course, one of the biggest differences between Grey Goose vs Titos is their ingredients. Grey Goose is made from wheat. Meanwhile, Titos is made from yellow corn. They also have slightly different productions processes.

Grey Goose is made from wheat that is grown in Picardy, France. The company claims that the wheat for making this vodka is soft winter wheat that is categorized as superior bread-making wheat. The distillation takes place in the same region. According to the company, Grey Goose is the first vodka produced with the Maitre de Chai (Cellar Master) tradition, which supposedly helps to create distinctive aromas.

During the distillation, the wheat’s carbohydrates are broken down by enzymes to create fermentable sugars. Then, it is fermented in six cascading tanks, before the wash is distilled through a five-step process. The produced spirit is then sent to Cognac, France, to be blended with natural spring water and bottled.

Titos is quite different. While vodkas are commonly made from wheat, potatoes, or grains, Titos is made from yellow corn. The company claims that the benefit of this ingredient is that it is naturally gluten-free. The vodka is also free from additional sugar or gelatin.

The yellow corn is micro-distilled in old-fashioned pot stills, just like high-end cognacs and fine malt scotches. The company claims that the handcrafted technique brings more control over the distillation process, and this is necessary for the best, cleanest product with superior excellence. The vodka is filtered through the finest quality activated carbon to cleanse it from congeners, phenols, esters, and organic acids.

One unique thing about Titos is the simple bottling. It is even proudly highlighted in their marketing. The company doesn’t care about a premium-looking or expensive bottle. If they use a frosted and painted bottle, they will probably charge more for the product. They prefer a simple yet effective bottle that can keep the vodka in the best quality. Hence, the price of the vodka can remain relatively affordable.

Alcohol Content
Just like most other vodkas, Grey Goose and Titos have an alcohol content of 40% ABV. Although the European Union sets a minimum of 37.5% ABV for a product to be called a vodka, most manufacturers stick with 40% ABV.

The ABV percentage is defined by the number of milliliters (mL) of pure ethanol that is present within 100 mL of the vodka at 20oC (68oF). Some countries and companies may use a different measurement to show the alcohol levels in their vodkas, such as Alcohol Proof. In the United States, the Alcohol Proof value is defined as twice the ABV percentage. So, 40% ABV is equal to 80 Proof in the United States. 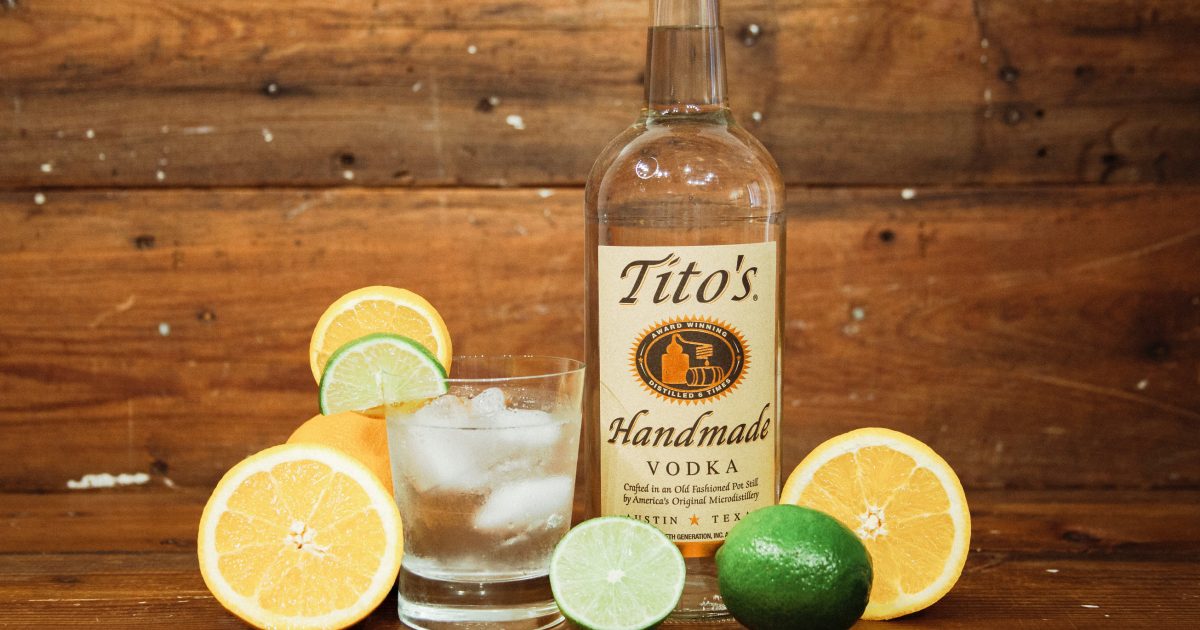 Aroma and Flavor
So, how is the aroma and flavor of Grey Goose vs Titos? A lot of people say that all vodkas taste very similarly, with little to no differences. Several experiments of blind testing have shown that most people are unable to distinguish expensive and cheap vodkas apart. That said, some experts and experienced vodka drinkers say that different vodkas do have different notes, however subtle.

Grey Goose does not have any special thing in the flavor profile. The only notable characteristic is that it has a smooth texture. It runs smoothly through your tongue and down your throat, without causing a heavy burn. However, the flavor is bitter. It starts with a slightly bitter taste, which then become more bitter in your mouth and even more bitter after going down.

At least, it is an actually drinkable vodka, as it does not heavily burn your throat. It does not require a chaser. That said, getting a chaser for this vodka can be a good thing.

Grey Goose is commonly used for various vodka cocktails. This is because of the smooth and relatively clear profile. It is especially good for Le Fizz, Espresso Martini, and Scarlet Punch. It is usable for the Simply Orange screwdriver, but its bitterness will dilute the sweet notes. Nevertheless, it is not recommended if you want to add some complexity into your cocktail’s flavor, as it is rather dull.

Titos is a highly recommended choice if you don’t care about spending money for prestige. Although it is much more affordable than Grey Goose, it offers such an impressive flavor profile. It is completely neutral without any ridiculous bitterness. The only noticeable taste is the standard ethanol burn, which is definitely tolerable. This is a vodka that can be drunk straight and enjoyed by males and females alike.

The aroma is also very nice. It has a mild sweet aroma. It feels clean on the nose. The texture is incredibly smooth; it is almost indistinguishable from water, except for the slightly thicker and heavier character. It has a sparkling clarity.

Titos can work quite well in various cocktails. It is a very good choice if you don’t want to alter the original flavor of the cocktail. It simply adds some alcohol into the mix. When used for the Simply Orange screwdriver, you will enjoy the real sweetness of the orange juice. However, just like Grey Goose, Titos is not recommended if you want to add some complexity to the cocktail’s flavor, as it is very plain.

Titos does not have any flavored variety. It only has the original unflavored vodka. However, on the company’s official website, you can find various infusion recipes which you can try if you want to spice up things. For example, there are the Pink Lady Infusion, Rosemary Infusion, Toasted Pecan Infusion, Vanilla Infusion, Orange & Chai Tea Infusion, Hatch Chile Infusion, Pickle & Jalapeno Infusion, and Coffee Liqueur. Making your own infused vodka is indeed interesting.

Conclusion
Between these two, Titos is more recommended. It gives you the best value for the money. It has a completely neutral flavor. The texture is incredibly smooth. Although it does not have any flavored variety, there are various infusion recipes that you can try.