As one of the most popular beverage in the world, Coffee has been made into several other beverages that also carry the original popularity into an even wider consumer. In today Iced Latte vs Iced Americano article, we are going to compare these two similarly coffee basic beverages that gain so much fans from especially teenagers and younger people. Even though they are based with the same ingredient, they taste quite different. If you are interested to know them more, go check our article below. 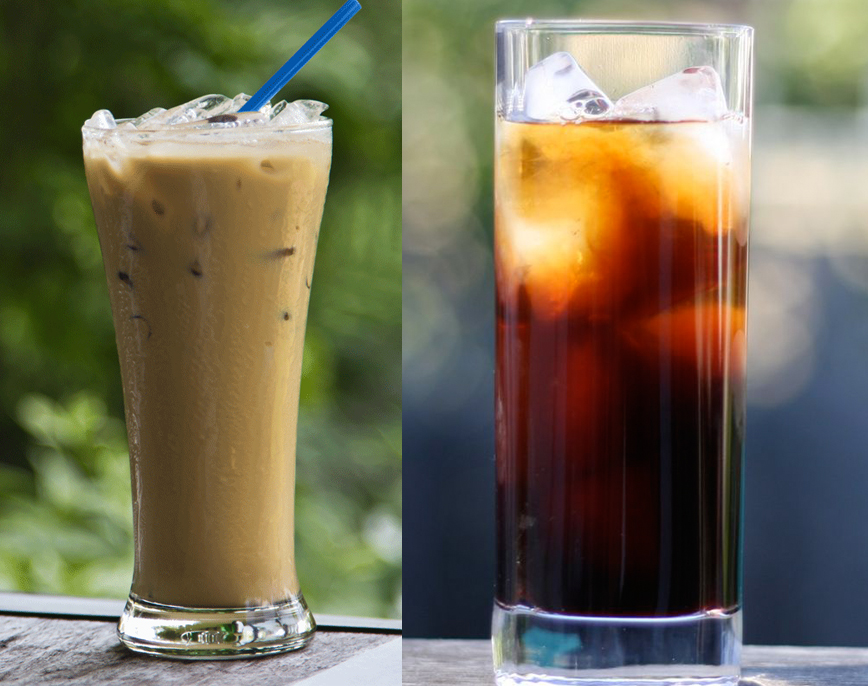 About Latte
We are sure most people ever drink a latte before since it is available widely in almost every city in the world no matter where you at. This drink is actually originated from Italy and simply means “milk coffee”, which is of course mirrored the ingredients used in the making process. The name latte itself now is adopted by other drinks not only coffee but also tea based drink like the popular Matcha latte. The liquid can be lightly brown with a white topping made from milk.

Latte Making
In the place where it comes from, coffee latte is traditionally prepared at home and served hot at breakfast. The coffee there is brewed using Moka pot, which poured into a cup containing heated milk, so it is not foamy like how it usually look like. What we often see and enjoy is the international version of Latte that made with one shot of espresso in a single 30ml or 60ml cup for 2 shot of espresso.

The next step is adding heated milk into the cup and top with a thick foam made from milk. In the US itself, latte is also commonly heavily sweetened. If it is served cold or as Iced Latte over ice, the milk used is chilled milk and without any foam added while the sweetening usually comes from syrup. Read also: Caffe Latte vs Cappuccino here.

About Americano
Another popular coffee based drink is Iced Americano, which from the outside looks very similar to Iced coffee that you won’t be able to tell the difference without taking a sip of them. This drink is just like its name, it is American style of ice coffee served in a glass as opposed to the hot version that is served in a small cup. Together with iced latte, this one is Starbuck’s popular beverages in many places with its bold taste bringing out the coffee nuance.

Americano Making
What makes Americano different from regular brewed coffee is its brewing method. Unlike regular brewed coffee that dilutes the chemical in the coffee ground slowly, taken from Wikia, Americano is made with espresso, which brewed using a method where water is force through the coffee ground. This method result in thicker liquid with higher concentration of suspended solids while producing a thin layer of crema on top.

If hot Americano is served by adding hot water into the espresso, Iced Americano replacing it with cold water instead and then added with ice and the crema usually gone when cold water is added.

Comparison
Now, let’s compare Iced Latte with Iced Americano. The difference here is very simple since it is down to choose whether you want to add your espresso with water or milk, which resulting in different taste. Iced Latte generally taste sweeter and creamier while Iced Americano has bolder coffee taste and of course bitterer if not added with any sweetener.

Conclusion
All in all, the decision is all yours to make. In our opinion, both of them are equally delicious depend on your personal preference and we honestly can’t choose between both for we equally drink them. However, if you prefer creamier and sweeter drink, go for Iced Latte but if you love the distinct taste of Coffee, Iced Americano is the one to pick.