All people know the standard dairy milk, but not many people know the other milk varieties that are also derived from cow milk. Kefir and buttermilk are some examples. Both are cultured beverages made from fresh milk. In this article, we will discuss the differences between kefir vs buttermilk so that you can choose the best drink for your health. 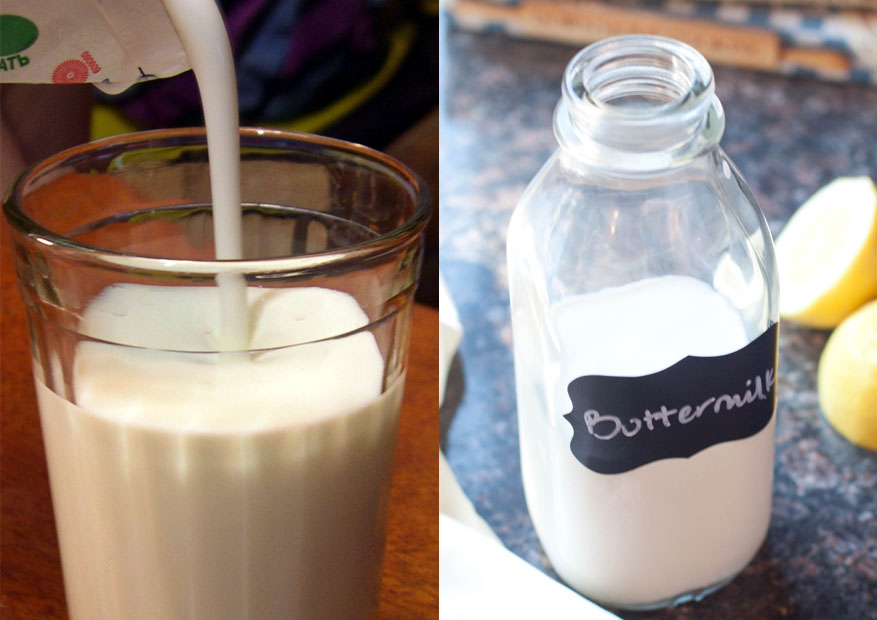 How They Are Made
Kefir is made by adding kefir grains into milk. These kefir grains look like small buds of cauliflower, and are actually colonies of yeast, bacteria, sugars, and proteins. They are responsible for the fermentation of the milk. The granules of active cultures are then strained from the fermented milk before the bottling process.

Meanwhile, before pasteurization was introduced to the world, buttermilk was made by leaving whole milk to stand so that the cream content could separate. After some time, the cream content would rise to the surface. It would be skimmed off so that only “skim milk” was left. Afterwards, fermentation would occur on the milk, and the milk would become sour. (Read also : Skim Milk vs Whole Milk)

However, today’s buttermilk is made by adding lactic acid bacteria to nonfat skim milk. The process is known as acidification, and it adds tartness as well as more proteins to the milk. This is the reason why modern buttermilk is more formally known as cultured buttermilk.

What They Contain
Although both kefir vs buttermilk are cultured drinks, they contain very different probiotics. Their recipes differ greatly from each other. They use different cultures. According to LiveStrong, the nutritional values of kefir and buttermilk are similar with just negligible differences. 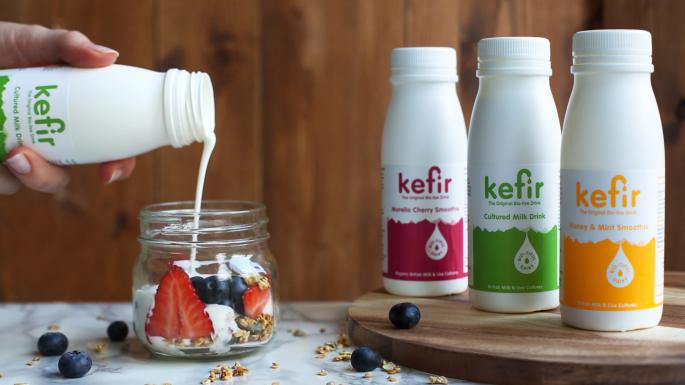 On the other hand, there aren’t many probiotics inside buttermilk. It is typically made with lactic acid bacteria. You need to use either Lactobacillus bulgaricus or Lactococcus lactis, but not both. It does not contain any yeast. This does not necessarily mean that it has fewer health benefits than kefir; it is just different. The probiotic content is still highly beneficial for your digestive health.

Appearance and Texture
In terms of appearance and texture, kefir vs buttermilk don’t look very different from each other. They look very similar. It is difficult to tell which one is which if you put them in unlabeled bottles.

The colors of kefir and buttermilk may range from white to slightly yellowish or brownish, but only slightly. They may also have some bubbles, but not always.

But you can also make thicker and creamy kefir and buttermilk. It may take a few days or a week to create a kefir or buttermilk with a consistency that is similar to a pourable smoothie yogurt. If you want to make something that is even thicker, you should use milk with a hight fat content. Adding cream can help to thicken the result. Another way is to undergo a second fermentation process after the initial grains have been removed.

Finally, the timing of the bottling plays a big role in deciding the texture of the drink. If you want thick kefir or buttermilk, you should not bottle it too early. The ideal time to bottle for making a thick texture is when little pockets of clear whey start forming in the jar.

Flavor
Kefir and buttermilk also have similar flavors. Again, it is quite difficult to distinguish the two apart from the flavors alone if you put them in unlabeled bottles. They both taste like a hybrid between sour cream and yogurt.

A distinctive feature of kefir and buttermilk is the aroma. You can smell a mild sour scent when you open the packaging. When you taste it on your tongue, you will be delighted (or surprised) by a tart of tanginess that accompanies dairy elements.

Uses
There are many ways to play with kefir and buttermilk. Of course, you can drink them right away – but what is the fun of it? There are many recipes available on the Internet for making drinks that are based on kefir or buttermilk, such as strawberry kefir smoothie and spiced buttermilk.

In addition, kefir and buttermilk are also commonly used for cooking and baking. They can be used as a sourdough starter. They will add some tanginess to the flavor. They may also be used to tenderize meat, for making ice cream, and in sauces and salad dressings.

Nutrition and Health Benefits
In general, kefir and buttermilk have similar nutrition. Kefir may have slightly higher total calories and carbohydrates than buttermilk, but the differences are very insignificant, even if you are currently dieting. The fat and protein levels of kefir and buttermilk products available in the market are more-or-less similar.

Kefir and buttermilk consumption is highly beneficial for your health. The probiotics in the drink can aid in food digestion and keep a healthy balance in your gut. They prevent harmful bacteria and yeasts from growing too large; by keeping such harmful pathogens in check, the probiotics can save you from various health problems. They may also help to reduce the risk of colon cancer.

Conclusion
Kefir is made from kefir grains, which are colonies of yeasts, bacteria, sugars, and proteins. Kefir contains a variety of bacteria and yeasts. On the other hand, buttermilk is made from lactic acid bacteria, which is either Lactobacillus bulgaricus or Lactococcus lactis. They both have a thick texture, mildly sour aroma, tart flavor. They both are beneficial for your digestive health.