Ketel One and Grey Goose are renowned premium vodka brands. They are among the most popular vodkas in the market, and many people are willing to spend money for these vodkas despite their expensive prices. So, between Ketel One vs Grey Goose, which one is actually better? We will compare the two vodkas against each other – continue reading! 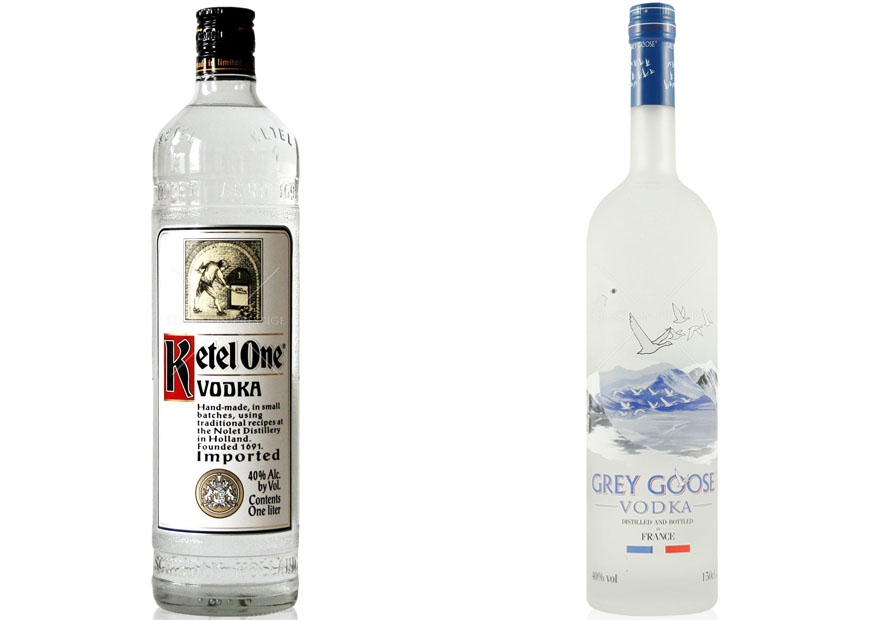 Ketel One: Company Background
Ketel One is a vodka that is produced by Nolet Distillery, which is a Dutch distillery with a rich history. The vodka is named after their original coal-fired pot still, which was named Distillerketel #1. The vodka has been around since as early as 1691. The distillery is located in Schiedam, the Netherlands, and is owned by the Nolet family. See also: Belvedere vs Ketel One.

The Nolet family started to export their liquors in 1867. Until the end of the nineteenth century, the Schiedam town was known for its alcohol industry with more than 400 distilleries. Unfortunately, World War II hit the town hard and left only 40 distilleries. Years after years, the advancements of technology as well as mergers and consolidations eventually left Nolet as the only distillery that is now still operating in the town.

Ketel One entered the United States market once in 1902, but the prohibition era forced them to stop their operation here. Carolus Nolet, a tenth generation of the family, took over the company in 1979 and changed the company’s focus to produce only one product to make it as good as possible. Ketel One entered the United States market again in 1983. So far, it has been successful with a decent portion of market share.

Instead of direct advertising to consumers, the Ketel One vodka is mainly promoted through the distributors and bartenders. This is effective for building the image of a premium vodka. However, the company does not completely ignore their consumers. In 2014, the Brand Keys Customer Loyalty Engagement Index put Ketel One at the second place.

Ketel One: Ingredient and Production
Our previous vodka comparisons mostly match vodkas that are made from different ingredients. However, it is different this time. As a matter of fact, both Ketel One vs Grey Goose vodkas are made from wheat.

Ketel One is made from 100% wheat. So, it is similar to the typical vodka, which is usually made from grains or potatoes or corns. The Nolet family uses wheat from the local area. The wheat is then distilled in copper pot stills. The wheat is processed in small batches to maintain the quality and consistency.

After the distillation, the liquid is filtered through loose charcoal. The filtration is meant to remove all physical and chemical contaminants. The liquid is stored inside tile-lined tanks until the bottling process takes place. The vodka is bottled in a nice, translucent glass bottle with a label which proudly states the hand-made production process. 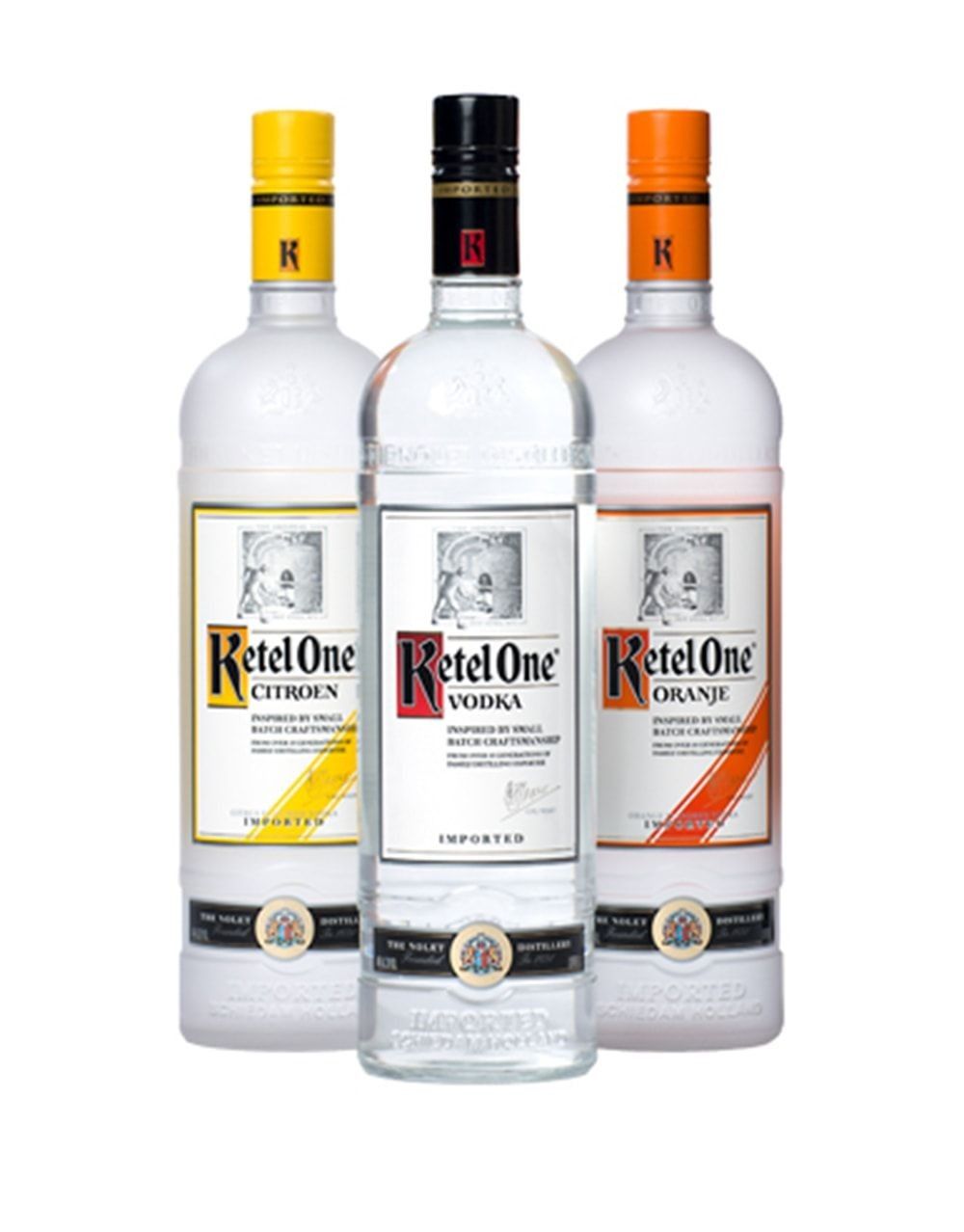 Besides the original, unflavored vodka, Ketel One is also available in several flavored variants. The production process for the flavored variants is not explained in detail, but it is apparently a maceration process which involves the mixing of the vodka with a macerated fruit and a distillation at a low temperature.

There are now two flavored versions, Ketel One Citron and Ketel One Oranje. In addition, there is also a new line called Ketel One Botanical, which has unique flavors including peach and orange blossom, grapefruit, cucumber and mint, and rose.

Ketel One: Flavor
Just like most other vodkas, Ketel One vs Grey Goose vodkas have an alcohol content of 40% ABV. This is the de facto standard for vodkas, although the minimum alcohol level for a vodka is actually 37.5% ABV. That said, there are some vodkas that have extremely high alcohol levels, up to 95%.

A lot of people love Ketel One, and this is for good reasons. It is indeed an excellent vodka. Many people agree that it is totally worth the money.

Ketel One will impress you right from the start with its incredibly smooth texture. It goes down smoothly without burning your throat. The aroma is tinged with light citrus and lemon notes. When in the mouth, it is pretty much flavorless. It is really clean and neutral. It will only leave a mild bitterness afterward, which does not require a chaser at all. There is also a slight aftertaste of sweetness and menthol.

Ketel One is also an excellent mixer. The slight bitterness prevents it from becoming the perfect mixer, but it is still great. The clean and neutral profile will allow you to mix it for pretty much any cocktail. However, it will not really add complexity to your cocktail, except if you use one of the flavored versions.

Grey Goose: Company Background
Grey Goose actually comes from France, even though the brand was made by Sidney Frank in the 1990s. Grey Goose was produced by Sidney Frank Importing Co (SFIC) in partnership with a French cellar master, Francois Thibault, before it was sold to Bacardi in 2004.

Sidney Frank created Grey Goose because he wanted to sell a luxury vodka to the United States market. France was chosen for the basis of the vodka production in order to distinguish Grey Goose from other vodkas at that time, which mostly came from Eastern Europe. 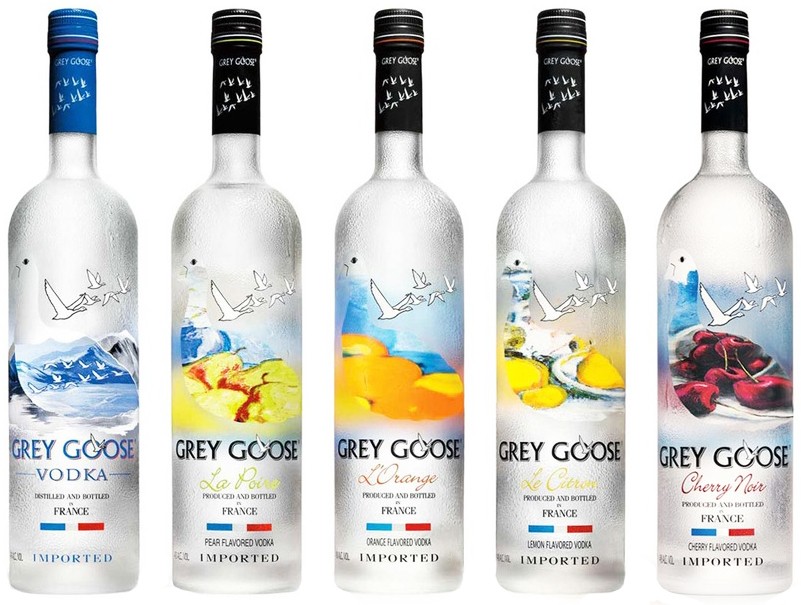 Grey Goose is often perceived as the drink of the economic elites. Many experts believe that it is popularity is only because of its image as a luxury item instead of its actual flavor or quality. Nevertheless, Grey Goose was awarded as the best-tasting vodka in the world by the Chicago Beverage Testing Institute in 1998, and it has indeed become a best-selling premium vodka in the United States.

Grey Goose: Ingredient and Production
As explained above, Ketel One vs Grey Goose vodkas are similar that they have an alcohol content of 40% ABV and they both are made from wheat. However, there are some differences in their production processes.

Grey Goose is made from wheat. According to the company, the wheat is acquired from the Picardy area of France. They say that they only use soft winter wheat for the best quality vodka. The distillation is performed in the same area.

During the distillation, the carbohydrates inside the wheat are broken down into fermentable sugars by certain enzymes. It is fermented inside six cascading tanks before it is distilled again through a five-step process. Then, the spirit is sent to Cognac to be blended with the natural spring water from the facility. Finally, the vodka is bottled.

Grey Goose: Flavor
Although these two vodkas in our discussion are made from a similar ingredient, the differences in their productions processes do deliver different flavors. However, Grey Goose is not exactly impressive, although it is not bad either.

Grey Goose is notably smooth, but it does not have any special feature in its flavor profile. It goes smoothly over your tongue, and it does not burn the throat. It is really bitter. It starts with a mildly bitter flavor the first time it reaches your mouth. It becomes even more bitter after going down the throat.

On the positive side, it is still a very drinkable vodka. It does not require a chaser. But getting one is not a bad idea.

Nevertheless, the relatively clean and neutral profile has made Grey Goose a common choice for mixing cocktails. It is particularly good for Espresso Martini, Le Fizz, and Scarlet Punch. However, it is not really good for sweet cocktails. You can use it for the Simply Orange screwdriver, but the underlying bitterness will somewhat dilute the sweet orange notes. Also, it is not recommended if you want to enrich the cocktail’s flavor, unless you use one of the flavored variants.

Ketel One vs Grey Goose

Conclusion
Between these two vodkas, Ketel One is generally more recommended. It has a better overall flavor. It is smooth, and it is almost flavorless. It only leaves a mild bitterness after going down, with slight notes of sweetness and menthol. The neutral flavor profile makes it an excellent mixer for pretty much any cocktail. Besides the original unflavored vodka, it is also available in several flavored variants.