We agree that pancakes can go along with a lot of kind of toppings and can be eaten with some other kind of food. Pancakes is not only delicious but also pretty easy to make and can be prepared quickly, which is why people are eating it for breakfast. The simplest toppings we use is probably a slice of butter or syrup. There are two brand which is very popular and already used by many people since a quite long time ago, Mrs. Butterworth’s and Aunt Jemima. Both of them are brands of pancake syrup we are already familiar to. Both of these syrup are said to be made to imitate maple syrup. Since maple sap is quite expensive, people are making syrup which has a similar taste to maple. 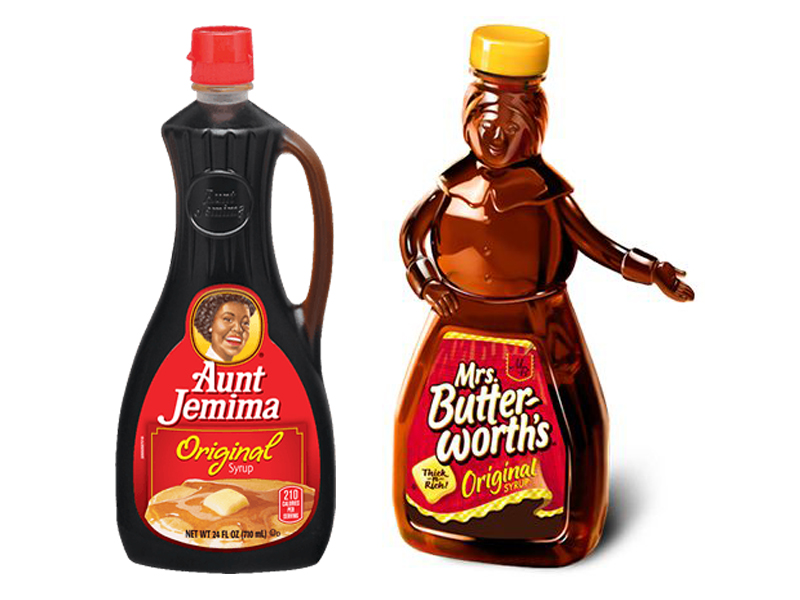 Maple syrup is a syrup made from xylem sap of sugar maple, red maple, or black maple trees, even so it also can be made from another varieties of maple. In cold climates, these maple trees store starch in their trunks and root before the winter, the starch is then converted to sugar that rises in the sap in late winter and early spring. Maple trees are tapped by making a hole, usually by drilling them into the trunks. People then began to collect the exuded sap. Which is processed by heating to evaporate much of the water, leaving the concentrated syrup.

It is known that maple syrup was first made and used by indigenous peoples from North America, the practice then adopted by European settlers, who gradually refine the production method. Maple syrup is graded according to the Canada, United States, or Vermont scales based on it density and translucency. Sucrose is the most prevalent sugar in maple syrup. In Canada, syrups must be made exclusively from maple sap to qualify as maple syrup and must also be at least 66 % sugar. There are three kinds of maple trees used in making maple syrup, they are sugar maple, black maple, and the red maple, the reason is because of their high sugar content in the sap. Maple syrup production is centered in northeastern North America, but with the correct weather condition, it can be made wherever suitable species of maple trees grow. Maple syrup farm is called “sugarbush”, or “sugarwood”. Maple are usually tapped beginning at the 30-40 years of age. Each tree can produce approximately 35 to 50 liters of sap, depending on the size of the tree. Maple trees can be tapped for sap until they are over 100 years old. 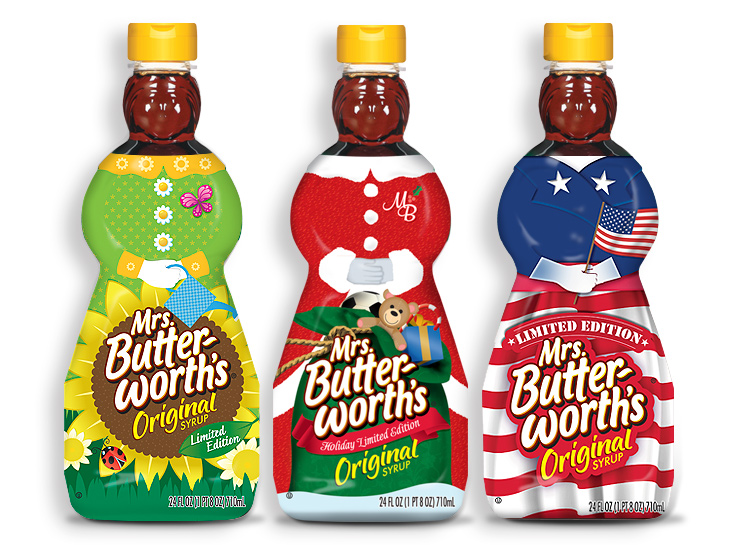 Mrs. Butterworth’s
Mrs. Butterworth’s is an American brand of syrups and pancake mixes, it is previously owned by Unilever but it is now owned by Pinnacle Food. The syrup was first marketed in 1961 and now is being distributed worldwide. Despite being commercialized as buttered-syrup, Mrs. Butterworth’s is only contain about 1% of butter. Mrs. Butterworth contains fructose corn syrup, corn syrup, water, salt, cellulose gum, molasses, natural and artificial flavors, potassium sorbate, sodium hexametaphosphate, citric acid, caramel color, and polysorbate 60. In their advertisement from 1970s the bottle of Mrs. Butterworth’s comes to life and talks with the help of CGI. In 1987s ad, it was revealed that Mrs. Butterworth’s first name was Joy. She was reluctant to use her first name because he childhood friends refereed to her jokingly, as “Joy Buzzerworth” making fun of her using the “joy buzzer” reference. 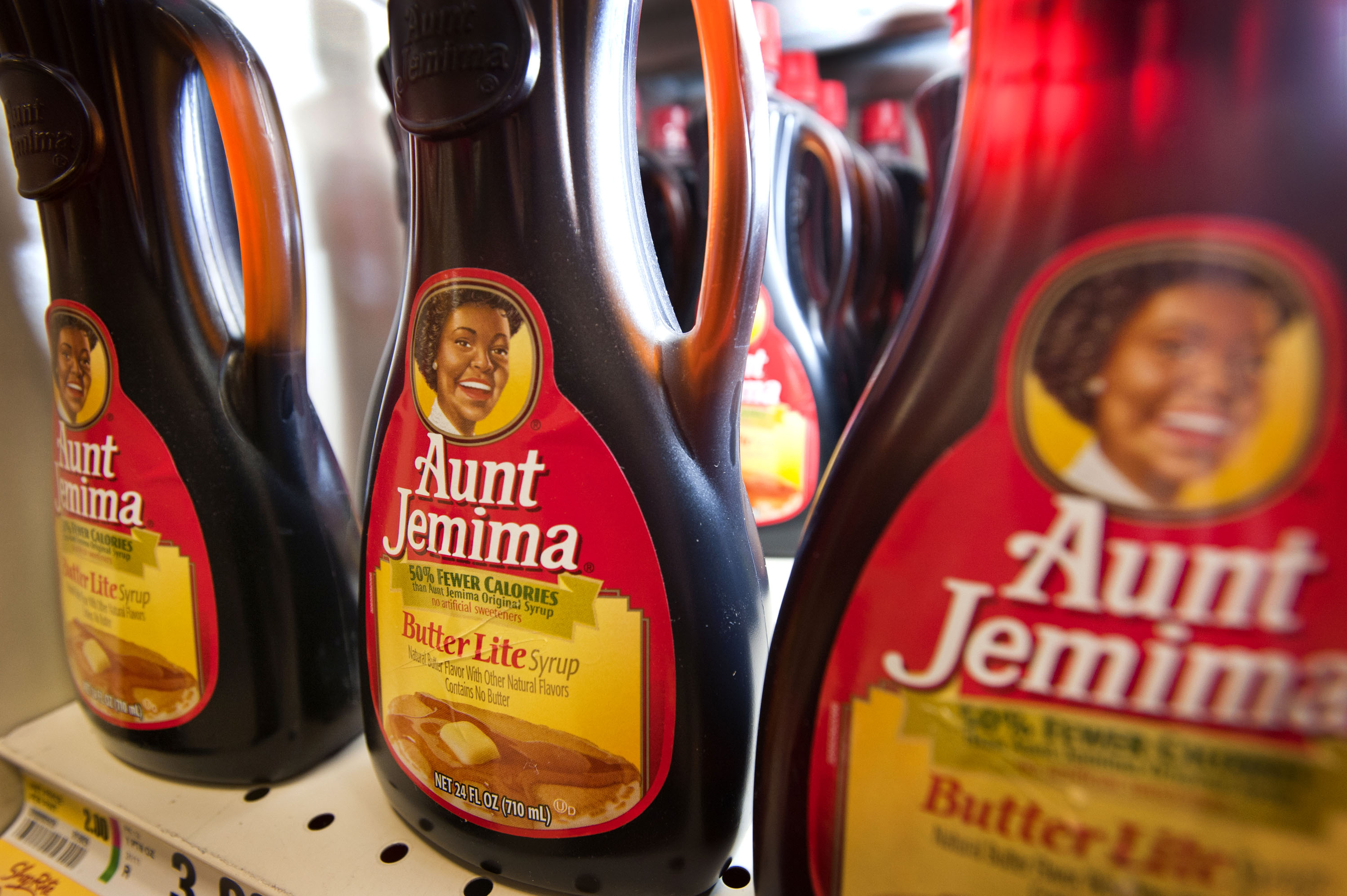 Aunt Jemima
Aunt Jemima is a brand of syrup and pancake mix made in the US. Aunt Jemima was first marketed in 1889 but the trademarks is registered in 1893. Aunt Jemima’s name was inspired by Billy Kersands song “Old Aunt Jemima”. Aunt Jemima contains corn syrup, high fructose corn syrup, water, cellulose gum, caramel color, salt, sodium benzoate and sorbic acid, artificial and natural flavors, and sodium hexametaphosphate. Aunt Jemima syrup was first introduced in 1966 and embodied an early twentieth century idealized domestically that was inspired by old southern hospitality. The backdrop to the trademark image of Aunt Jemima is a romanticized view of antebellum plantation life. The myth surrounding Aunt Jemima’s secret recipe, family life, and plantation life as happy slave contributes to the post-Civil War idealism of southern life and America’s developing consumer culture. The first advertisement of aunt Jemima is using a paper doll to attract people to buy it.