For people who are addicted to soda it may be a good decision to substitute soda with sparkling water. Since soda gives a lot of bad influence on human body. Sparkling mineral water have the soda sensation because it is also carbonated, it can be a better life choice, since it will not give bad impact on our body. Some brands of mineral water also enriched with minerals which is needed by our body to function. There are two brands of sparkling mineral water which is equally popular and consumed by many people around the world. They are Perrier and Pellegrino, both of them are taken from nature and consist of various important minerals. Here is some information about Perrier and Pellegrino, and how both of them might be different. 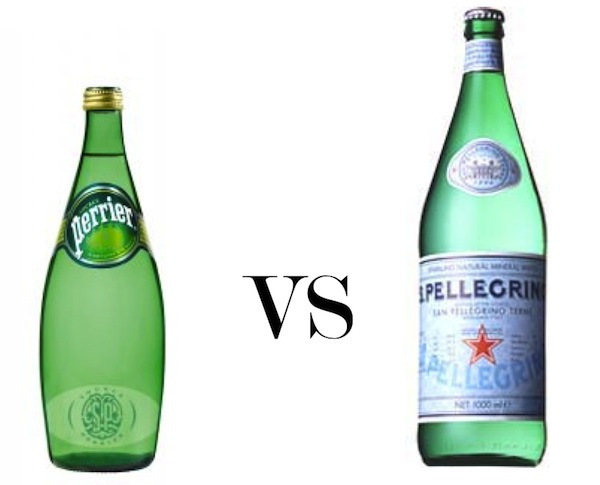 Perrier
Perrier is a French brand of bottled mineral water. The water was taken from Vergeze, placed in the Gard department. Perrier is well known for it naturally occurring carbonation, distinctive green bottle, and higher level of carbonations compare to its rivals. The spring where the Perrier water was taken is naturally carbonated. But the water and the carbon dioxide were taken separately. The water is purified and during the bottling, the carbon dioxide were added into the water, to match the level of carbonation in Vergeze spring. In Europe Perrier is sold in a 750 ml, 339 ml and 20 ml glass bottle, but it also available in 330 ml cans. Some other region may also have the 250 ml can Perrier water. Perrier also have many flavors aside from it natural taste such as, lemon and lime, citron lemon-lime, pink grapefruit, green apple, and mint. (See also : Perrier vs Soda Water) 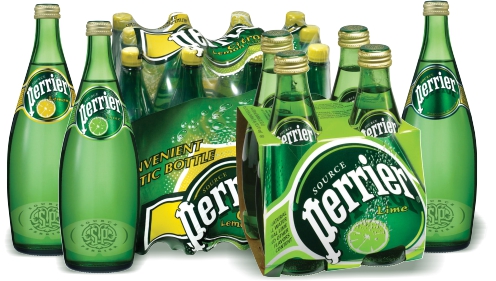 In 2002 new varieties of Perrier have been introduced in France, for example Eau de Perrier which have less carbonated than the original one and comes in a blue bottle. The other one is Perrier Fluo, which comes on several flavors such as, ginger-cherry, peppermint, orange-lychee, raspberry and ginger-lemon. In each bottle of Perrier contains zero calorie. The flavored Perrier was given taste by using essentials oils and it is also do not contribute in adding the calorie. There is 2 mg sodium and 4% of daily recommended calcium intake in each 8 oz. of Perrier serving. The history behind Perrier back then in 1898 when a doctor named Louis Perrier bought a spring called Les Bouillens. He was opening a spa there and also sell its spring water. The spring then sold to a wealthy British visitor named St Harmsworth. Lord Harmsworth then close the spa and began bottling the mineral water from the spring. He marketed it in Britain when Frechness was seen as a chic and aspirational to the middle classes.

Pellegrino
Pellegrino is a beverages company originated from Italy, which specializing in natural mineral water and is owned by the SanpellegrinoS.p.A., whose production plant is located in San Pellegrino Terme in the Province of Bergamo, Lombardy, Italy. SanpellegrinoS.p.A is part of Nestle since 1997. Sanpellegrino has ten production site in Italy including at its Headquarters. They employ for about 1.850 people and also manages other brands like Vera, Levissima and AcquaPanna. 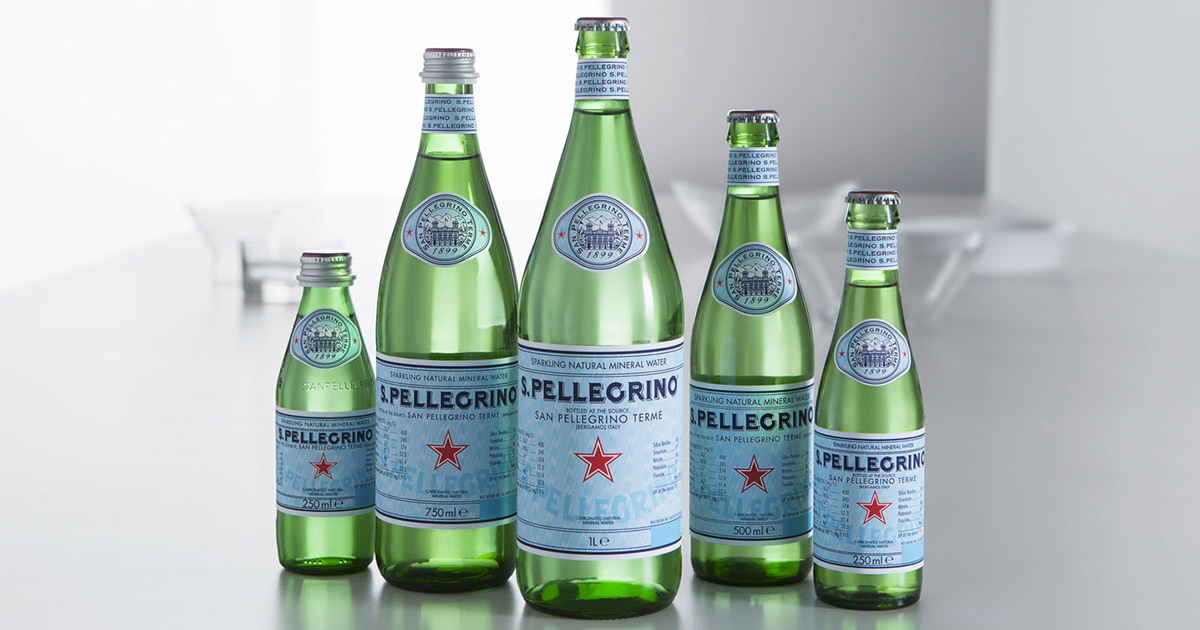 In 2005, Pellegrino sold 500 million bottles globally and it has increased to 1 billion in 2017. Their products are currently being distributed all around the globe. The previous name of SanpellegrinoS.p.A. was SocietaAnonimaDelleTerme di S. Pellegrino S.p.A., it was shorten on April 20, 1970. Also from then they decided to no longer use mineral water in their soft drink production and began to use spring water which is treated with a particular equipment. San Pellegrino mineral water is taken from San Pellegrino Terme and the water is originated from layer of rock around 400 meters below the surface, where it is mineralized from contact with limestone and volcanic rocks. The spring is located at the foot of a dolomite mountain wall which favors the formation and replenishment of a mineral basin. The water itself is not naturally carbonated, the carbon dioxide is added in the bottling process after the water is sterilized. The water from this spring is only used for the natural Pellegrino and not for the flavored version.

Conclusion
Perrier and Pellegrino is both sparkling mineral water. Perrier comes from France while Pellegrino comes from Italy. The other differences is that Perrier use both natural water and natural carbon dioxide gas from nature, but they are taken separately and combine again in the bottling process. While Pellegrino water do not use natural gas, the water itself is not naturally carbonated and the gas is added in the bottling process. The both of them contains calcium, chloride, bicarbonate, fluoride, magnesium, nitrate, potassium, sodium and sulfates. But Pellegrino is enriched with lithium, silica, and strontium. Pellegrino have 5.6 pH while Perrier have 6 Ph. Both of Pellegrino and Perrier are actually own by nestle. Choosing between both of them may only lay your personal taste and preferences.