Adult body is made at least 60% of water and we need to drink enough of the liquid to make sure our body perform as it should be. We may get bored sometime with regular water and we will swift for another fancier thing like bubbly water that gives us a different sensation than just a boring plain water. In today Perrier vs Seltzer article, we are going to give you information about these two similar yet different bubbly water and how they are separated from each other. 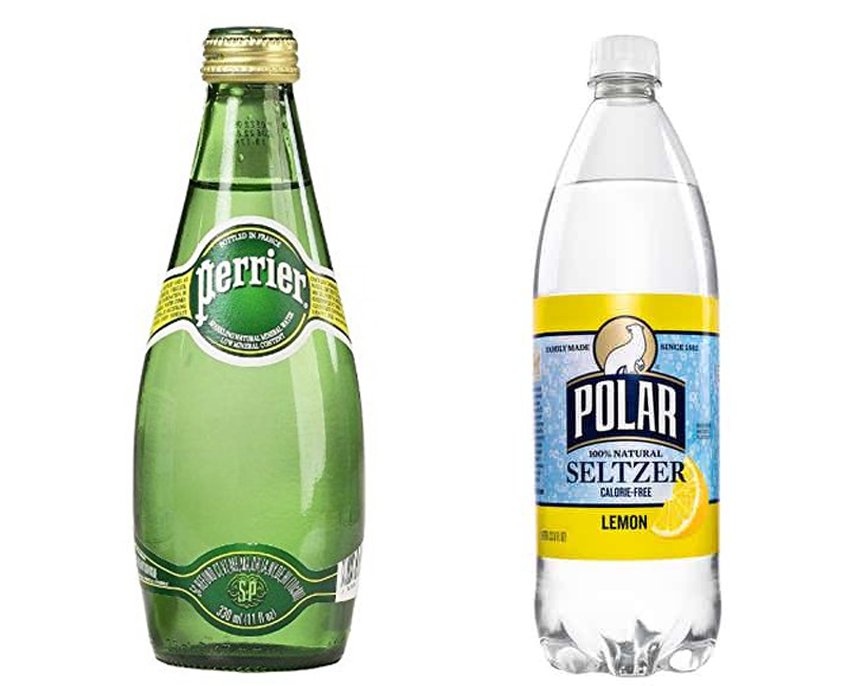 About Perrier
For you who never drink a Perrier before, this is actually just a mineral water but of course with something special because if not it won’t be this popular. The water inside those green bottles are what makes it is special and cost more than average bottled water. The water are said to be coming from a natural source far away in Vergeze located in the Gard department in France, so the carbonation inside is naturally occurred from when it is taken.

Beside the plain water, Perrier also offers bottled spring water in several flavors like Lemon and Lime, Citron Lemon-Lime and Pamplemousse Rose or Pink Grapefruit in France and in the US. Another taste which is a mint flavor is also available in France. Read also: Perrier vs Pellegrino here.

Perrier Production
However, even though it is natural it doesn’t mean that the water don’t follow another process before packed into the bottle. Perrier water source itself is indeed naturally carbonated but, the water and carbon dioxide are captured independently. Before bottling, the water have to follow a purifying process and after it is ready, carbon dioxide is re-added along the bottling process to follow the level of carbonation of the Vergeze Spring.

About Seltzer
Since there are so many carbonated water out there, it becomes hard to differentiate one and the other because not only they taste very similar, most of them also contains similar ingredients or minerals that affect the water taste. One of them is Seltzer water, which is another form or carbonated water and commonly used by people to make flavored beverages since it won’t affect the final taste. Taken from Huffingtonpost, the name itself is coming from a town in German called Selters.

Today, you can get seltzer water easily almost everywhere form so many different brands like Canada Dry, Schweppes, Polar and many more. Almost all of those brands also offer a range of flavors as an addition to the plain carbonated water.

Seltzer Production
Seltzers is actually only a regular water but then added with artificial carbonation to give it that fizzy feeling like drinking soda. Unlike club soda, this drink is not added with another minerals and taste just like regular tap water. The place inspired its naming is famous for the natural spring but Seltzers is not made with spring water and initially exist as a cheaper alternatives for natural spring water even until today.

Comparison
Now, let’s compare Perrier with Seltzer water. As we have already mentioned in our article above, the basic difference between these two is because Perrier is coming from natural spring, so it is rich in minerals like calcium, chloride, fluoride, magnesium, nitrate, potassium, sodium and sulfate while at the other hand Seltzer is regular water but then carbonated artificially, so it will have rather similar taste than tap water but Perrier will taste different because of those minerals.

Conclusion
All in all, the decision is all yours to make. In our opinion, both of them are equally refreshing but are made for different use. Perrier is more expensive with the benefit from minerals and have a different taste than regular water, so it is best to be drink as it is while Seltzer water is good to replace any sweetened soda to cut that calorie intake or to be used in a mixed drink to enhance the taste.