Energy drinks are very popular for their convenience, and they also taste good such as Red Bull Vs Kratingdaeng. These famous brands are similar but different, and you may find them next to each other in some countries. These energy drinks come from the same manufacturer but are marketed for different regions. If you wonder how they are different, let’s see the formulation and possible side effects below. 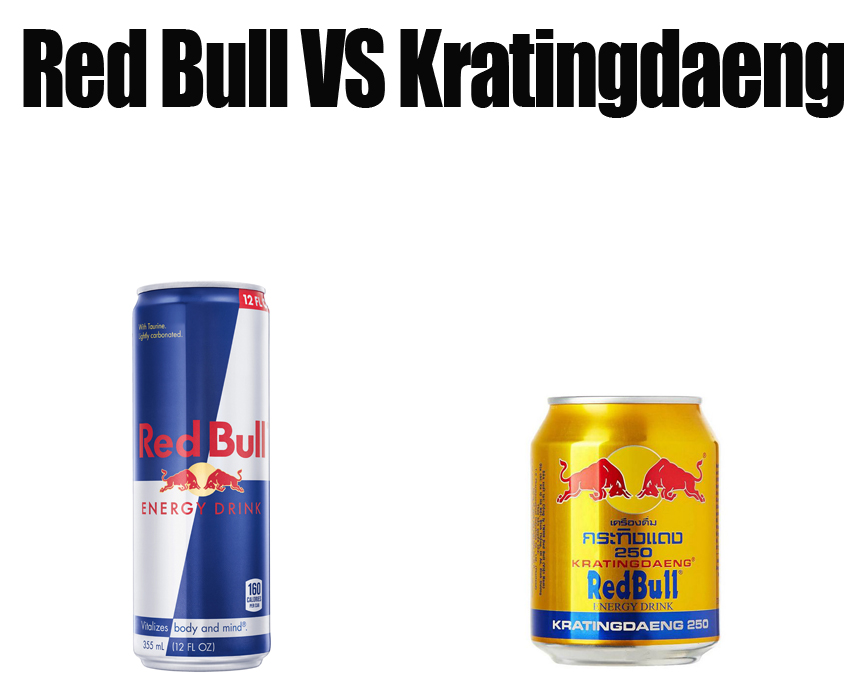 Many of us live busy lives and make unhealthy habits in modern days. The effects can be a lack of energy and constantly feeling tired, which is not uncommon. We usually seek a shot of fuel from a cup of caffeine like coffee or energy drinks. These two beverages are trendy and easy to access, so almost everyone can afford them. Energy drinks are not natural like coffee, even though they contain caffeine. Because energy drinks are formulated, they can have higher caffeine or other beneficial ingredients.

The energy drink invention dates back to post WWII, and it happens in Japan. In 1962, the Taisho pharmaceutical company produced Lipovitan D, an herbal drink marketed as energizing tonic, and sold in minibars in a small bottle. The product was marketed for truck drivers working long shifts and needing to stay awake. It used to be similar to cough syrup, but the benefit is for aiding physical and mental functions. The main ingredient, taurine, is still widely used in typical energy drinks today.

The company also produced a larger bottle of Lipovitan that contains 3,000 taurines but with a warning on the package that people should not exceed 100 mg of taurine per day. Nowadays, energy drinks come from different manufacturers; many of them are large companies such as PepsiCo with their Sting energy drink that is very popular in India and Pakistan, and some southeast Asian countries. They also have an upcoming Rockstar Unplugged, which seems to enter the US market this year. Read also: Red Bull Vs Coffee here.

About Red Bull and Kratingdaeng

While first invented in Japan, energy drinks didn’t receive their international breakthrough until an Austrian businessman Dietrich Mateschiz visited Bangkok and discovered the product. Before that, Kratingdaeng was already quite popular among Japanese executives in the 1980s and gained lots of recognition in the Asian market. However, Dietrich brought the product to a broader market by partnering with Kratingdaeng manufacturer in 1984 and changed its name to Red Bull for the western market. The combination of energizing ingredients in the drink was a huge success internationally.

The brand name change was probably to make it easier to pronounce and familiarize it with a wider consumer because Kratingdaeng is a Thai language, so it can be difficult to recognize by westerners. Today, you can find Red Bull and Kratingdaeng in many convenience stores, especially in Asia. Red Bull is more popular in the US and many western countries, but the two products are currently manufactured and owned by different companies; TCP Group of Thailand still owns Kratingdaeng. 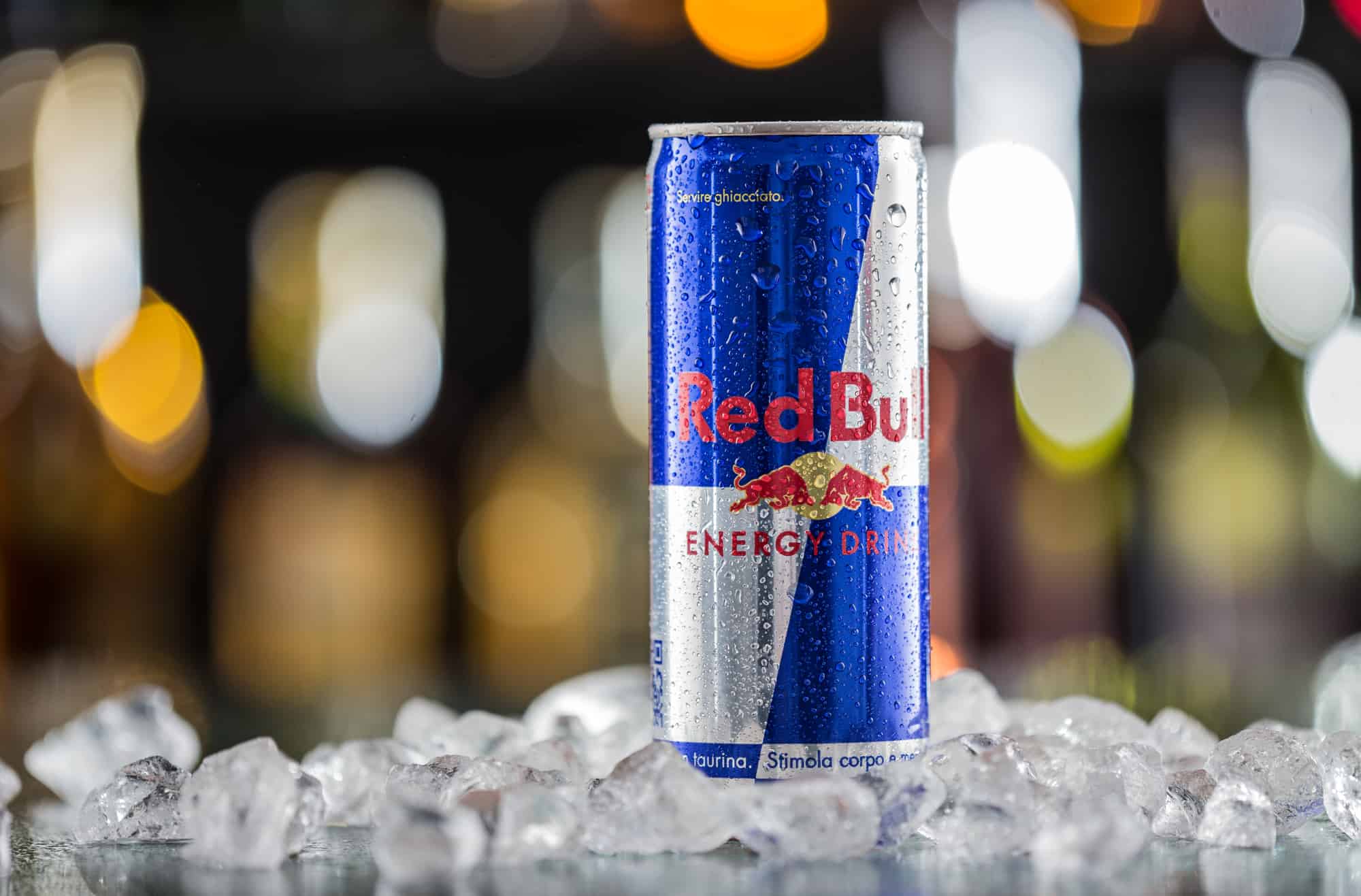 On the other hand, Red Bull is manufactured by Red Bull GmbH, an Austrian company. Interestingly, the Red Bull GmbH is still majority controlled by Yoovidhay’s heirs, the Kratingdaeng formulator and Mateschitz. The two brands use a similar logo or two red bulls facing each other, and this is an identity that helps the brand be easily recognizable. Red Bull and Kratingdaeng are very similar for formulation and taste, but some differences are worth noting, such as the caffeine content and variant.

However, we recommend following the nutrition facts and ingredients in your bottle or can when comparing the two. Unlike Red Bull, which usually has the same formulation regardless of where it is marketed, we have found Kratingdaeng to have different serving sizes and slightly different ingredients depending on where you live or the product itself. Today we are comparing the can version of both energy drinks.

The easiest way to differentiate Red Bull and Kratingdaeng is by the packaging. They are completely different, with Kratingdaeng dominant in the yellow and blue shade while Red Bull is silver and blue. The can shape also different because Red Bull uses a more modern, thin, tall can while Kratingdaeng uses a wider but shorter can. Kratingdaeng is also often found in tinted glass bottle packaging, which you will see in many Asian markets or convenience stores.

Another main difference between Red Bull and Kratingdaeng is the variants because Red Bull has expanded the flavor and variants over the years. We all know that energy drinks are typically high in sugar, so Red Bull offers both Sugarfree and Zero sugar variants which are their non-calorie solutions for people concerned. They also have plenty of flavors, such as cranberry, lime, and blueberry. Some other flavors are only available in certain regions or during specific times. Red Bull also sells organic soda called Organics by Red Bull.

There are mainly two reasons why people love energy drinks; first, it gives them convenient energy, and second because they taste good, especially when cold. Before you decide on drinking one, it is wise to see what they are made with so we can be more aware of the benefits and side effects. Starting with Red Bull, this energy drink is made with carbonated water, sugar, glucose, citric acid, taurine, natural and artificial flavor, sodium bicarbonate, magnesium carbonate, food coloring, caffeine, niacinamide, pyridoxine HCI, calcium pantothenate, and vitamin B12.

The nutrient facts of Red Bull and Kratingdaeng are similar with some slight differences. The serving size is identical or 8.4 oz and 250 mL per can, giving you 110 and 180 calories per serving respectively. Both contain 80 mg of caffeine and 1000 mg of taurine. Kratingdaeng contains higher sodium at 260 mg per serving, while Red Bull is only 105 mg. But, Kratingdaeng offers more vitamins with 50 mg choline, 50 mg inositol, and 50 mg lysine. 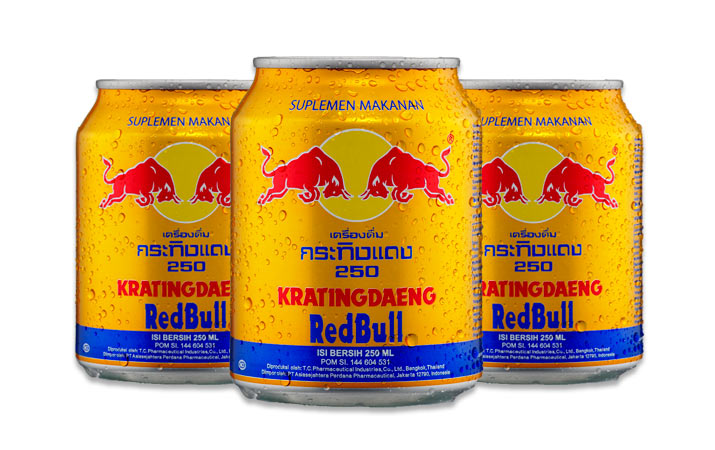 On the other hand, Red Bull offers niacin, vitamin B12, vitamin B6, and pantothenic acid, which are also available in Kratingdaeng. Both energy drinks don’t contain fat and protein less than 1 gram. The carbohydrate content is mostly coming from their sugar. However, if you get the bottle version of Kratingdaeng in Thailand with a blue label, it seems that the calorie of the beverage is much less or about the same as Red Bull.

The star ingredients of energy drinks, including Red Bull and Kratingdaeng, are taurine and caffeine. Taurine is a sulfur containing amino acid naturally occurring in the brain, eyes, heart, and muscles. Taurine is readily available from foods like meat, seafood, and dairy. The primary role of taurine in the body is to maintain proper hydration, form bile salts for digestion, regulate minerals like calcium within cells, support the general function of the nervous system, and regulate immune system health and antioxidant function.

The reason taurine is very popular in energy drinks is that it may boost athletic performance because of its ability to enhance muscle contraction and delay muscle fatigue. It is also helpful to increase fat burning during exercise to fuel your activity. On the other hand, caffeine is a stimulant that stimulates your brain and nervous system. It increases cortisol and adrenaline in the body, so a dose of caffeine can make you more awake, feeling refreshed, or focused.

Red Bull and Kratingdaeng Side Effects

While energy drinks like Red Bull and Kratingdaeng are similar to supplements and are usually safe, it doesn’t mean they are safe to consume in an excess amount. One of the most concerning is sugar content, which increases your daily sugar intake, especially if you already eat and drink sweets. Too much caffeine in the long term can build up caffeine tolerance and, in a short time, may cause severe heart and blood vessel problems like heart rhythm disturbance and increased heart rate.

Like most convenience products and supplements, it is wise to take precautions, especially if you plan to consume them often. Red Bull and Kratingdaeng are similar but also different. They taste refreshing with a slightly tangy or acidic flavor. Red Bull is fizzy as it is made with carbonated water while Kratingdaeng is not, so it is generally tastier if you love fizzy water. Red Bull contains fewer calories and vitamins than Kratingdaeng can variant.

The decision is all yours because the essential ingredients, taurine, and caffeine, are about the same on Red Bull and Kratingdaeng. We recommend the lower sugar options if you will try drinking one because it is safer when you are already eating other sources of added sugar daily.