There are so many distilled spirits in the world and even though the basic are just 6, they are enough to make endless list of cocktails and liqueurs. Each one of them brought different taste to the final drinks. In today Rum vs Vodka article, we are going to give you information about these two popular spirits, so you will know more about what they are made of and how they are differ from each other. If one or both of them took your interest, go check our article below. 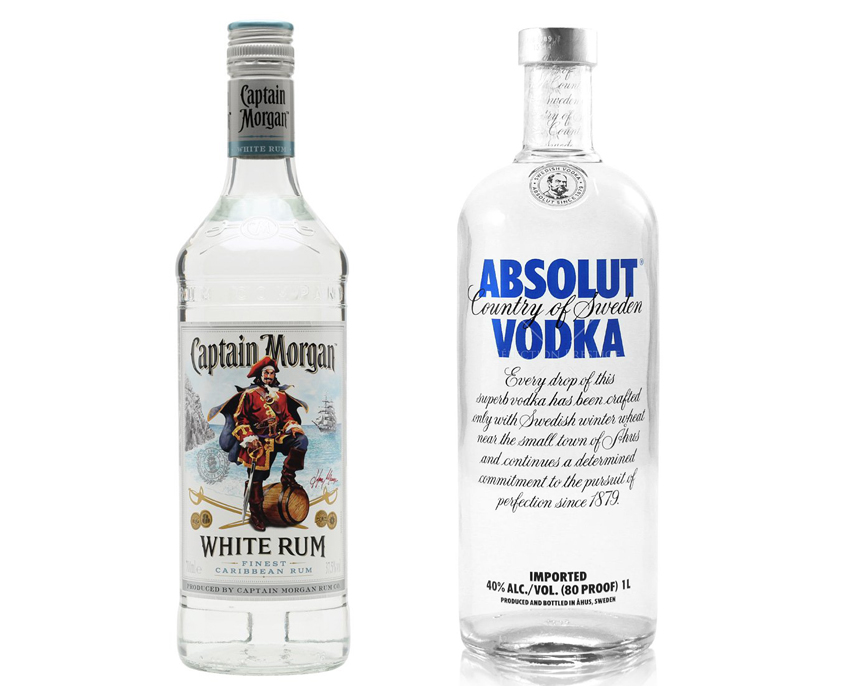 About Rum
First, let’s talk about rum. If you are already legal, you probably ever had a taste of this alcoholic beverage. For those who never know where the drink comes from, it is actually made from sugarcane byproducts like molasses or from pure sugar cane juice. Today, the drink is mostly manufactured in the Caribbean and Latin America. Just like Tequila, there are several grades of Rum and the lightest is the most common used in cocktails while the golden and dark grades are usually drank neat.

Similar to other alcoholic drinks, Rum’s origin also not very clear but the first distillation of the drink done by people in Caribbean dated back in 17th Century when the slaves at that time discovered that molasses from sugarcane could be fermented into alcohol. The distillation process then remove impurities from the molasses and created more concentrated alcohol. Commonly, rum contains at least 40% alcohol. Before this theory, rum production was also found in Brazil proven by a tin bottle found on a Swedish warship sank in 1628.

Rum Cocktails
As it has been mentioned earlier, you can drink rum neat or as a base for numerous cocktails, if you fancy the latter, try this refreshing cocktail named Pina Colada from bbcgoodfood. First, prepare the ingredients like 2 ounces of light rum, 2 ounces coconut cream, 4 ounces pineapple juice, and 1 cup crushed ice. To make the drink, pour all ingredients in a blender and blend until smooth then serve.

About Vodka
Another popular spirit that take the alcoholic world in recent years is Vodka. Some people may not fond of the drink because it lacks of taste and aroma unlike other types spirit but it also what makes it popular since it will make other ingredients used stand out more. The drink itself usually have 40% alcohol by volume and can be made from many things but the best drink is said only made from winter wheat and grains. Instead mixed traditionally Vodka is drank neat. Read also: Tito’s vs Ketel One here.

The origin of Vodka is not clear but the first word is recorded in 1405 in Akta Grodzkie record of deeds. At that time, the drink is not actually a drink and more like a chemical compounds for medicine and cosmetics cleaners. The large production of vodka is starting at the end of 16th century in Poland and today, it can be made almost anywhere. In the United States itself, it is mostly made from 95% pure grain alcohol.

Vodka Cocktail
If you think vodka is not that good when drank neat, try making them into mix drinks or cocktails. Our recommendation is Moscow mule to freshen your day. First prepare 50 ml vodka, crushed ice, ginger beer, ginger bitters, and slice of lime as well as sprig of mint for garnish. To make the drink, pour the vodka in a metal mug and add the crushed ice until ¾ full. At the top pour ginger beer and stir then add a few dashes of ginger bitters, garnish it with lime and mint.

Comparison
Now, let’s compare Rum with Vodka. The basic of these spirits are already different since Rum is made from sugarcane molasses while Vodka is made from many starch rich material like grains and potatoes. Rum is aged depend on the grade but Vodka is not and can be consume right after. Aged rum is darker while vodka is clear and mostly colored if added with flavorings. Normally, Rum is distilled two times if they used a pot still unlike Vodka that commonly distilled 3 times.

Conclusion
All in all, the decision is all yours to make. Both of them are equally tasty depend on your preference. If you are not sure yet, it is best to test them one by one and see which suit your taste buds better.