Soju and Sake are two popular alcoholic beverages from East Asian countries that also widely drank in many other countries. Both share similar appearance and sometimes mistaken for each other. To help you differentiate both drinks, we are going to provide some basic information about Soju and Sake. 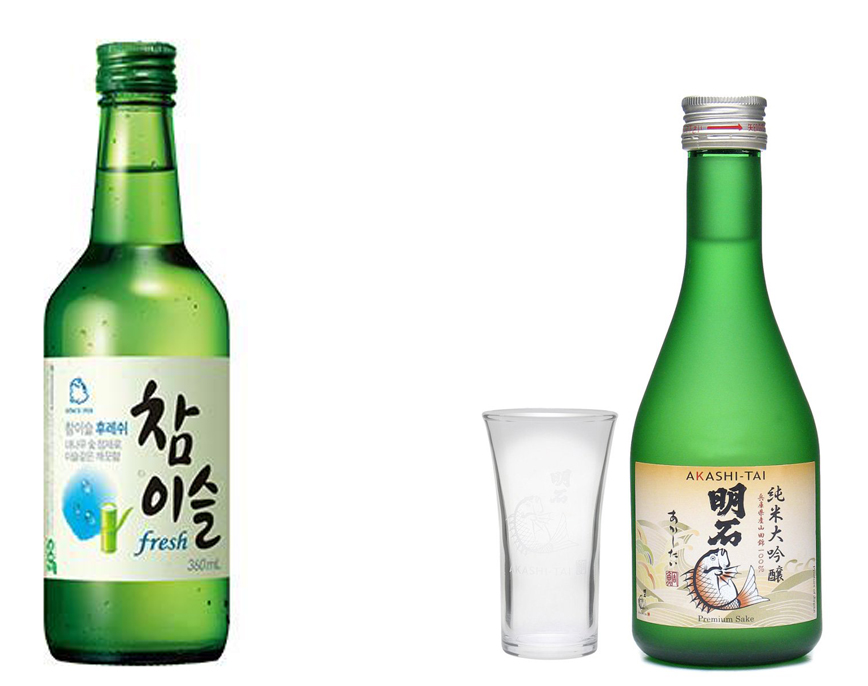 About Soju
Soju is a Korean traditional alcoholic beverage that was made from various grains, such as rice, wheat or barley. This alcoholic beverage is very popular among Koreans as well as people who loves Korean tradition or Korean foods. Aside from people who are initially interested in the beverage, many people know it from popular Korean dramas where there are many drinking practice shown in the shows. Soju have no color, typically comes in green glass bottle and drink neat without anything added.

Taken from Wikipedia, the alcohol content of Soju may vary from 16.8 to 53%. Even though the traditional Soju are made from grains, in modern days, many producers made Soju with other starches, such as tapioca, potatoes, or sweet potatoes. The word Soju means burned liquor, which is a reference to the heat of distillation.

Soju History
Soju is developed in 13th century, when Mongol invaded Korean Peninsula and introduced Levantine distilling technique to Korean. The distilleries at that time is focused around the city of Gaegyeong. The modern Soju is the direct root of Andong Soju from Andong city where Yuan Mongol’s logistic based was located. Until 1965 Soju alcohol content is 35% but in present day many Soju from different producers have less than 17%. However, you can find traditional hand-crafted Soju with alcohol content until 53%.

Soju Production
As it have been mentioned earlier, Soju was initially made with various grains. If the Soju is made from for example rice, the rice wine will be fermented for around 15 days and then distilled by boiling the wine in a cauldron called sot topped with sojugori. Because there is rice shortage in Korea around 1965, Soju was begin to be made by distilling ethanol from sweet potatoes or tapioca, which then added with flavorings, sweeteners, as well as water. Even though the rice shortage was long passed, many producers still made Soju this way. 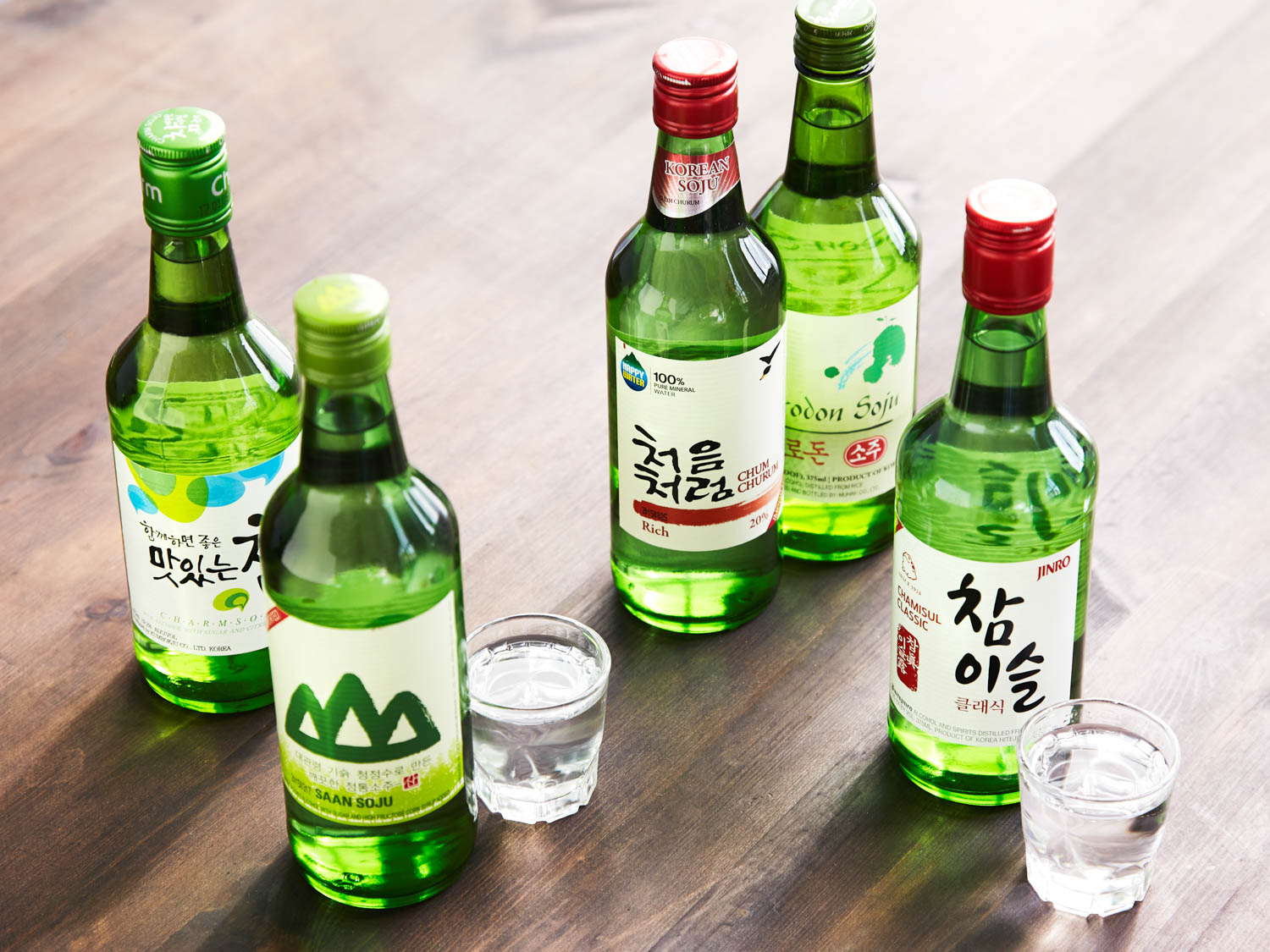 Another variant of Soju is begin to introduce in 2015, which is the Fruit Soju. This alcoholic beverage is similar to cocktail since it is basically the mixture of Soju and fruit juice.

Soju Serving
Even though Soju is commonly drank neat or without added with anything. In present day, Soju also used as the base spirit of many cocktails and mixed drinks. One popular cocktail named somaek, which is a portmanteau of Soju and Maekju or beer is created by combining Soju and beer. Another popular variant is made by blending Soju and fruits into slushy form and enjoy that way.

Soju also made into Bomb shot called poktanju, which a shot glass of Soju is dropped into a pint of beer and drunk quickly. If you are in for more unique drink, you may want to try yogurt Soju, which basically a combination of Soju, yogurt, and lemon lime soda.

About Sake
Sake is a Japanese alcoholic beverage that also called Japanese rice wine. The beverage is made from fermenting rice that have been polished. Even though it called rice wine, the method used to make sake is more similar to beer making. Sake is very popular in Japan and abroad as a neat drink. In Japan Sake is often served in many special ceremony with porcelain cup called sakazuki.

Sake is labelled as seishu in Japan, which means clear liquor but the term Sake is what it commonly used in conversation. Undiluted Sake alcohol content may vary from 18% to 20% but the common bottled sake alcohol contain is only 15%. Aside from being consume as alcoholic beverage, Sake also used in many Japanese cooking. For another alcoholic beverages, check our article on Gibson vs Martini here.

Sake History
Sake Origin is unclear since the Chinese alcoholic beverages predates its recorded history. According to Bamforth, Sake was probably made with rice, water and koji mold back then in Nara period between 710 and 794. Since the Heian period, Sake making is monopolized by the government, but since the beginning of 10th century temple, and shrines start to brew Sake and being the centers of production for the next 500 years. In present day, Sake is being produced in many places outside Japan, such as in China, Southeast Asia, South America, North America, and Australia.

Sake Production
Not all rice can be made into Sake, the rice used for Sake brewing is called sakamai, which then polished to remove the bran. Popular rice used to make Sake are Yamadanishiki, Gohyakumangoku, Miyamanishiki, and Omachi. Since the mineral in water affect the Sake, the best water to make Sake is called Miyamizu and located in Nada-Gogo, Hyogo Prefecture.

Polished rice then let rest and soak into water before they are steamed on a conveyor belt. Sake must gone through several fermentation steps before it was done. In cheap Sake making, brewer’s alcohol is added in a large amount before pressing to increase the volume of sake produced.

Sake Serving
Sake is commonly drink neat, some people may prefer drinking it cold and some may heat it if first before drinking, depends on the drinker taste, the quality of sake as well as the season. Hot sake is commonly drink in winter and high quality Sake shouldn’t be heated, since it will change the aromas and flavors. However, in present days, Sake also used as a mixer for cocktails, such as tamagozake, saketinis, or nagosake. You may also find a Sake bomb in may drink bars and Asia-themed karaoke clubs.

Conclusion
All in all, when it comes to decide which one is tastiest, you should only lay on your taste and preference. Since people have different taste, you are free to choose whichever. If you love your beverage to be strong enough you may want to try homemade Soju, but if you prefer a drink that you can enjoy longer you may want to try Sake.