If you are an athlete or a sports enthusiast, you should know that maintaining hydration is very important. You lose water, sugars, and electrolytes during a heavy physical activity, and you want to replace them to allow your body to recover quickly. Sqwincher Zero vs Gatorade are among the most popular hydration drinks in the market right now. 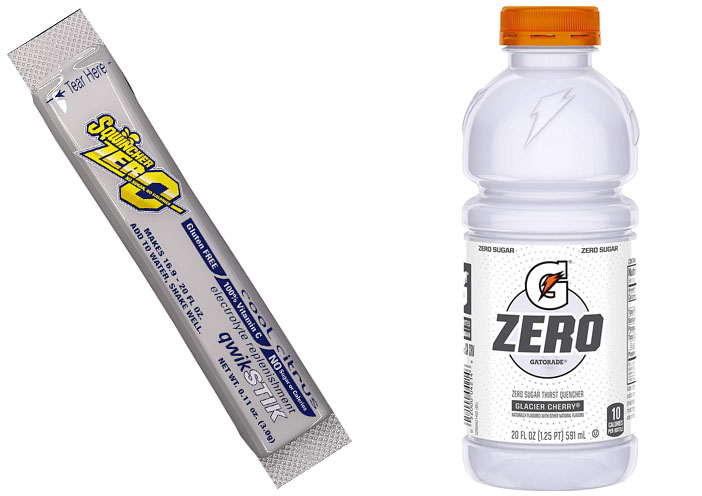 Overview
Both Sqwincher and Gatorade are among the most popular brands of hydration drinks in the market right now. Both companies have long history, and they do have their own loyal fans. You probably haven’t heard about Sqwincher as much as you have heard about Gatorade, but this is simply because they have different approaches. See also: Monster Energy vs Mountain Dew.

Sqwincher, founded in 1975, has a rather unique distribution model. They know that competing against Gatorade in the mass market is quite a challenge. Trying to snatch a significant market share from Gatorade will cost a lot of effort, and it won’t be efficient.

So, Sqwincher markets their products to the professional market instead. They tend to approach entities like electrical and construction companies, offering their hydration drinks to the workers who labor outside on hot days. That said, Sqwincher also markets directly to consumers, especially to outdoor enthusiasts.

Gatorade is an older company, as it has been around since 1965. No wonder that they now have a strong consumer base. The drink was initially produced by Stokely-Van Camp for the Gators, the athletic teams that represent the University of Florida. It was then purchased by Quaker Oats Company, and then by PepsiCo.

Today, Gatorade is one of the most recognized hydration drinks in the mass market. There is the Gatorade Sports Science Institute, a research facility that studies the correlation between exercise, nutrition, and environmental factors. Gatorade confidently claims that it is an effective hydration drink that is backed by real science.

Both companies have produced many varieties with different formulas. The regular hydration drinks typically contain some sugars, carbs, and calories in addition to water and electrolytes. However, if you are worried about gaining weight, Sqwincher and Gatorade do have zero-sugar options in Sqwincher Zero and Gatorade Zero.

Sqwincher Zero is very nice in terms of packaging options. There is Sqwincher Zero Fast Pack, which is a portioned container for one serving. You just need to add some water and mix the content; after drinking, you can throw the container away. 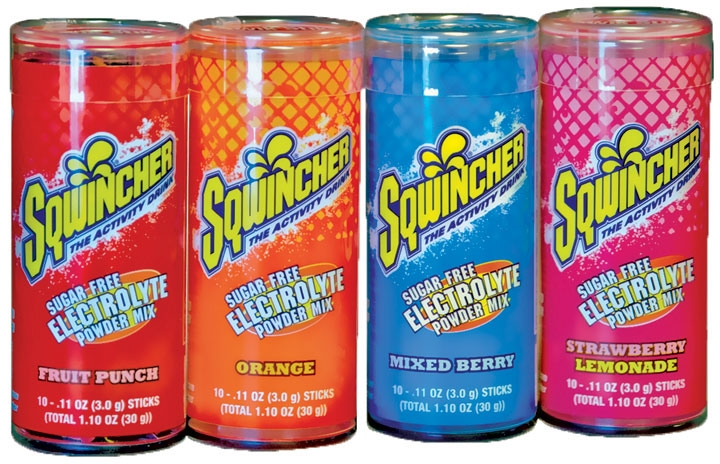 There are also Sqwincher Zero Qwik Stiks, which are single-serve sticks available in 8 oz and 20 oz portions. Sqwincher Zero Sqweeze Pops are frozen ice pops for hydration, really nice during hot weather. And there are the old-fashioned ready-to-drink Sqwincher Zero bottles, too.

Gatorade Zero is only available in 20 oz bottles. Actually, the other variants of Gatorade are available in powders and single-serve sticks. However, for this specific variant, the bottle packaging is the only one available. It may be a little bit inconvenient if you want to have some stock at home, as the bottles will take a lot of space in your refrigerator. Also, Gatorade Zero doesn’t come in ice pops like Sqwincher Zero does.

Varieties
In terms of flavor varieties, Sqwincher Zero once again wins over Gatorade Zero. There are many more flavor options on Sqwincher Zero vs Gatorade. Some people prefer to stick to their favorite flavors; however, having several other options to choose from will be really great when you are bored with a particular flavor. Gatorade Zero is much more limited in flavor options.

However, note that Sqwincher Zero Sqweeze Pops only come in tangerine orange and fruit punch flavors. The ready-to-drink bottles have 4 flavor options, which are orange, grape, mixed berry, and fruit punch. Sqwincher Zero Fast Packs have similar flavors as the Qwik Stiks, plus the addition of the cherry flavor.

Gatorade Zero, on the other hand, only has 3 flavor varieties. There are orange, lemon-lime, and glacier cherry flavors. Actually, the other formulas of Gatorade do have many flavors. For example, Gatorade G2, which is a low-sugar and low-calorie formula (not completely sugar-free), has grape, fruit punch, and glacier freeze flavors. Since Gatorade Zero is a relatively new line, there is a chance that the company will add more flavor varieties in the future.

Nutrition
Both products claim to be the best hydration drinks in the market, but a claim should be supported by enough proof. One way to determine the quality of a hydration drink is by checking its nutritional values. Here, we will compare the nutrition of Sqwincher Zero vs Gatorade.

Sqwincher Zero says that it is the best hydration drink because it contains less sodium and more potassium than other similar beverages in the category. One 8-oz serving of Sqwincher Zero Qwik Stik provides 55 mg sodium, 45 mg potassium, 0 g sugar, less than 1 g carbs, and 0 calories.

Of course, different people have different nutritional needs. However, the American Heart Association says that the ideal limit of sodium consumption for most adults is no more than 1,500 mg sodium per day. Excessive sodium intake can lead to heart disease. So, the lower sodium level of Sqwincher Zero will allow you to keep your sodium intake in check. 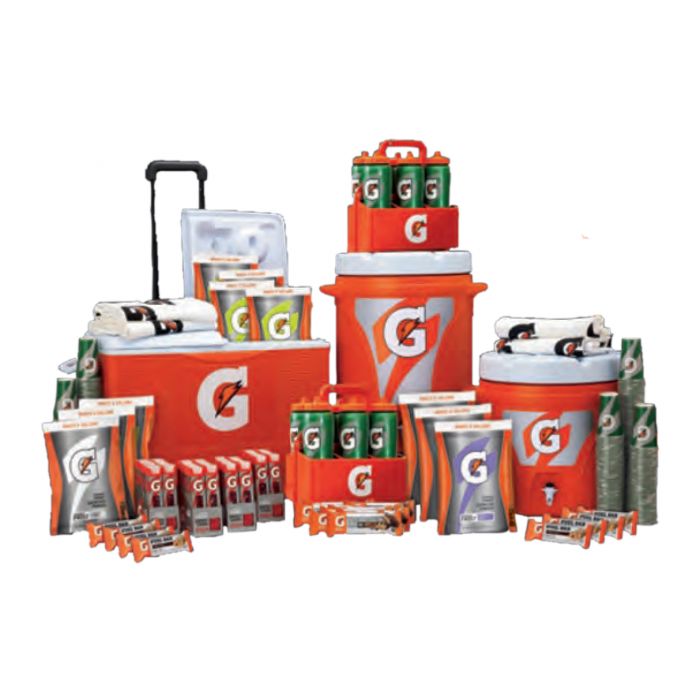 Sqwincher Zero contains a higher amount of potassium than most hydration drinks. The recommended potassium consumption is 3,500 – 4,700 mg per day. The higher potassium level is beneficial in two ways: to ensure optimum rehydration by making up for the lower sodium level, and to help you consume enough potassium for the day. Potassium overdose can happen, but this is rare because people usually don’t consume that much potassium.

Another advantage of Sqwincher Zero is that it is zero-calorie. It does not contain any sugar, and the carb content is not significant enough to increase the calorie level of the drink. So, Sqwincher Zero is really good for avoiding weight gain.

So, if you are a fan of this drink, you should monitor your daily sodium intake to make sure that you don’t go over the recommended limit. Indeed, you lose some sodium during your exercise, but you also don’t want to go overboard by consuming more than needed. Consuming several sodium-heavy snacks and drinks can quickly build up your sodium intake.

Gatorade Zero is sugar-free, but it is not truly zero-calorie. That said, you don’t need to worry too much about the drink increasing your calorie intake. It only has 10 calories per serving. This is just next to zero. So, Gatorade Zero can also be your choice if you are exercising for weight loss or if you simply want to keep your calorie intake controlled.

Flavor Profile
Finally, between Sqwincher Zero and Gatorade Zero, which one does actually taste better? This is a difficult question because the answer can be very subjective at times. Generally speaking, both drinks do have excellent flavors that are pleasant and enjoyable.

Sqwincher Zero has a slight advantage because it is available in powders. So, you can use as much water as you want. The recommendation is mixing 20 oz of water with an 8-oz serving, and this is actually good. The drink has a nice flavor without any metallic aftertaste. You can use slightly more water if you want to dilute it. And the powder is very easy to mix; it dissolves quickly without requiring too much stirring or shaking.

Gatorade Zero also has a great flavor profile. A lot of people especially love the glacier cherry flavor, which delivers something like a Hawaiian fruit punch sensation. Gatorade Zero does not have much aftertaste. Interestingly, despite being zero-sugar drinks, Gatorade Zero actually tastes quite similarly to the sugared versions. This is why many people who previously consumed only the sugared versions don’t have much problem when transitioning to the zero-sugar versions.

Conclusion
Both are good hydration drinks that can help you recover quickly after a heavy physical activity. However, Sqwincher Zero is generally more recommended. It has much lower sodium content. In addition, it is available in various packaging and flavor options, and it tastes great.